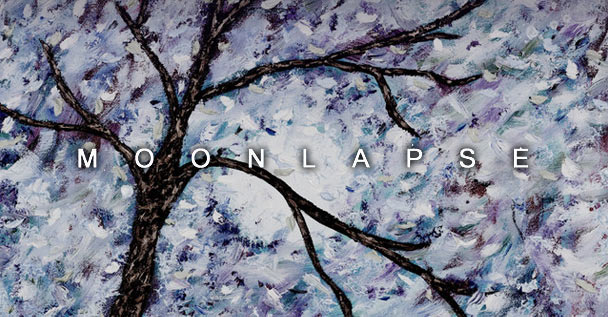 Stop. You may want to find a palette cleanser for your ears before taking another step into this review. When mixed with any thoughts or expectations, this one will lead you astray. However, if you come with a clear head, you may be quite surprised at what you find behind these musical curtains.

All of that is to say Moonlapse is a project that truly stands in a league of its own. I’m hard pressed to think of any other musicians who’ve developed a sound that completely falls in line with this approach. The closest thing I can think of is a project like Trove (ex-Means End) but even that is far from a match. Sure, there are similarities to others here and there but, all in all, Moonlapse stands firmly outside of the box.

So what shoots Moonlapse so far from the rest of the celestial bodies we call music? Well, my original definition upon first hearing the sound early this year with the 2017 album “Reversal” (yes, I was late to the party) was somewhere along the lines of groove laden Progressive Metal with an experimental twist… string composition and other instrumental programming where there would usually be guitars. That’s right… something akin to Progressive Metal largely without guitar work. This is a definite rarity anywhere under the metal umbrella.

Now, given certain stylistic changes and improvements from composer Ben Strick, I wouldn’t say that original definition reigns quite as true anymore. However, it does give an idea how far off the beaten path a release like this is capable of heading.

Now, before we dig into the release at hand, allow me to make some background introductions. Ben Strick started releasing Moonlapse music about 5 years ago. It all started with a heartwarming acoustic number by the name of “August” which was soon followed up by a darker acoustic composition by the name of “Our Silence”. That was appropriate because things would get quite loud and different following that with the debut “Conscious” album. This is where things got experimental as Ben began to look into some prog through a slightly different lens. This was thrown into a more electronic angle with the follow up album “Viridis” which served to contrast from all his work to date while simultaneously inching towards what would be a bit of a signature approach. This said approach really seemed to come into focus with the aforementioned “Reversal” album before dipping toes back into the electronic pool with the “Scarcity” EP this year.

All of that brings us up to today… Moonlapse has taken a swan dive back into an experimental approach on Progressive music with his latest EP release by the name of “Glacial Kin”. But does it stay all in the family of the Moonlapse approach while pushing the sound forward or does it fall flat? Let’s find out!

However, before we dig too far, it bears saying the music is available for listening via streams on this page. The music is also available for streaming and purchase through platforms such as Amazon, Spotify, Google Play, Deezer, and Soundcloud.

Now, I’ve been following the movements of this particular glacier for quite a few weeks now. It’s composed of a trio of tracks that add up to a ~14 minute experience that crosses a number of soundscapes. These three tracks found on “Glacial Kin” manage to be different from each other while all keeping a foot planted in a similar sonic space that ultimately pushes things forward from previous Moonlapse records.

It begins with the sprinkling of magic over the track “Arcane Lake” which sounds akin to a gentle snowfall over the glacier. This is nice because there’s already a visual storytelling element to the music which is achieved without the use of lyrics. Just music here! As the track proceeds, the sounds evolve in and out with a notable element…

In fact, the reason why I had backtracked a bit on the whole “prog largely without guitars” statement is because there are plenty of guitar parts written into the music of “Glacial Kin”. They often take on an acoustic and tasteful approach which is actually quite welcome within the sound. It warms things up a bit, if you will. I personally hope Ben keeps up this end of the Moonlapse sound while moving forward.

The EP then moves onto a darker and more mysterious number called “Elder Fossil”. The music twists and turns out of the listener’s ear, following the edge of some very prog infused songwriting. It makes for a nice jam that keeps the ears guessing. For example, there’s quite a notable flip and a guitar solo towards the end.

This all leads up to the title track itself! “Glacial Kin” is the longest part of the EP and closes things out in a dreamlike manner. The track evolves in a number of interesting ways which actually brings me to my next point…

The music of Moonlapse has always had a defined surrealistic nature to it. With closed eyes to this soundtrack and an active imagination, one can see all kinds of Wonderland / Dalí-esque scenarios take shape. I personally enjoyed having this record on while working through a number of creative mediums. It acted as a sort of lubricant of the imagination without being overbearing which is a lovely balance.

The title track is perhaps the strongest example of this surrealistic approach on “Glacial Kin” making for quite the theatrical closer. It ties the whole experience together nicely and actually has one of my absolute favorite moments off the entire record at the 3:14 mark.

Sometimes, it’s possible for songwriting to be so creative and strange that it’s unpalatable. Moonlapse, luckily is not an example of this! Ben’s approach to music is actually quite intelligent and focused within its outlandish parameters. Regardless of the way it keeps listeners guessing, pleasant surprises and nice passages can be found around most corners while taking in a record such as this.

On the flip side, with great variety comes great responsibility. One of my primary complaints about this project is the overuse of MIDI instruments. Or maybe it would be more accurate to say these instruments don’t sound organic enough. Sure, the programming is borderline brilliant but there’s a certain lack of living authenticity to be found in Moonlapse as of now. I generally wish things had a bit more meat on the bone as the music can sound thin at times in terms of production. If things were slightly more humanized or if guest musicians were brought on to fill certain roles, this would truly be something to witness!

However, as a positive on that last note, having listened to previous works from Moonlapse, there’s very clear improvement on his work involving synthetic instruments. “Glacial Kin” is definitely a new high water mark but there’s still more room for improvement. Also, there’s another plus on this front – it almost lends to an impression that this music is part of a videogame soundtrack. Through that lens, the EP is that much more enjoyable! This effect is brought even further by the earlier tidbit about Moonlapse’s music kick starting the imagination.

To answer the earlier question in regards to the overall Moonlapse evolution and “Glacial Kin’s” placement within it, I’d say yes. This EP certainly takes the unique Moonlapse sound that’s been developing for years and adds to it positively. I’d actually say this is the strongest showing from Ben’s ballpark to date. It improves on just about every part of the sound and while I wouldn’t say it’s perfect, I can safely say that I enjoyed listening to it. For that reason, my gut is feeling a 7 out of 10 on this one. It’s definitely a good record but I know the potential for Ben’s music is quite literally somewhere out of this world!

If you’re looking to give a listen and get strange, it’s recommended you do so! Once again, the music is available for streaming and purchase through the following platforms – Amazon, Spotify, Google Play, Deezer, and Soundcloud.