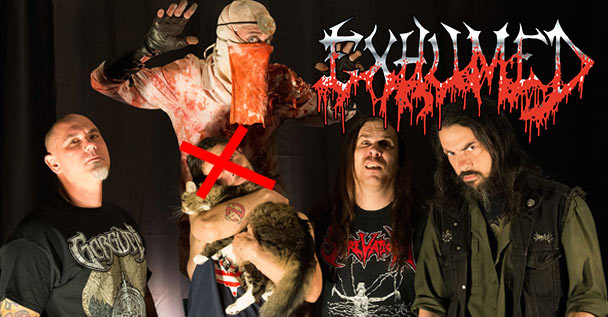 It would appear that Bud Burke is leaving Exhumed once again. Noisem guitarist Sebastian Philips will officially be taking his place.

“Californian gore-metallers EXHUMED welcome guitarist Sebastian Philips (NOISEM) into their ranks, marking the official departure of guitarist Bud Burke. Band founder, Guitarist / vocalist Matt Harvey commented “We’re super psyched to bring Baz into the fold. Anyone that’s seen us since Death Revenge came out can attest that he’s killed it on the last few tours, and we couldn’t ask for a better fit.” On joining the band, Phillips had this to say: “It’s been blast so far and since the first tour I did with EXHUMED, it just felt comfortable. I’d been a fan for a long time and getting to know them, I found out that we all come from the same hard rock and nasty fast extreme metal backgrounds, so it just made sense.”

Burke, who performed on Necrocracy and Death Revenge leaves the band on good terms. Harvey stated “Bud simply wasn’t available for touring as much as we needed him to be, it was that simple. He and I have been friends for years, and we both understood that this move made sense for the band – there were no hard feelings whatsoever.” The refreshed goretet – er, quartet are making plans to move forward with their re-tooled lineup (rounded out by drummer Mike Hamilton and bassist / vocalist Ross Sewage). “We’re definitely going back to into the studio next year,” confirms Harvey. “We have a ton of material that’s shaping up to be really aggressive, and we’re pumped to get Baz contributing to the writing and recording side of things as well!”