Face The Day “Stuck In The Present” Album Review 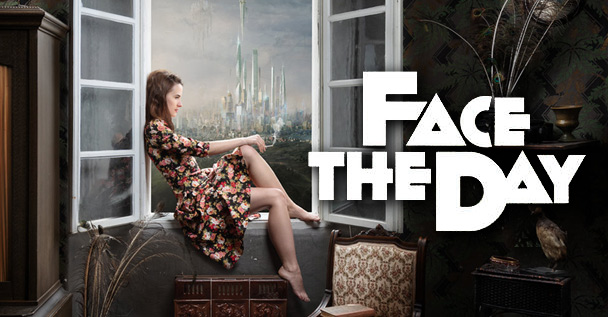 What’s better? To lay in defeat or to get up and Face The Day!

When there’s music like this to look forward to that becomes an easier question to answer. Face The Day is a one man Progressive / Alt Rock band making a big sound from the reaches of Prague, Czech Republic. In fact, this music could probably be recommended to fans of Porcupine Tree, Anathema, Opeth, and the like. If that’s not an indication of good times for prog heads, I’m not quite sure what is!

This music all comes from the mind of multi-instrumentalist Martin Schuster who’s responsible for writing, performing, producing, and recording his music. Talk about a work ethic! In conjunction with a number of other talents, he’s capable of bringing large scale projects to life. Just to up the ante, he also was once the leading force in the Progressive Death / Fusion Metal band Mindwork which sadly no longer seems to be in operation. However, if you’re interested in giving that music a go, the Bandcamp link is here.

Face The Day started up with the 2016 album called “Corroding Dreams” which set the tone with tracks that were both expansive and impressive for a number of reasons. However, that is not the focus of today’s review as it would appear that those dreams have not completely corroded… In fact, Martin Schuster has returned to bring the people some more music this year!

An all-new album by the name of “Stuck in the Present” just made landfall in recent weeks. It’s packed up with 8 tracks which, once again, can be considered both expansive and impressive. The total runtime lands at nearly 40 minutes between these installments. You can enjoy this firsthand through the streams provided across this page.

Furthermore, the music is all available for purchase and streaming through platforms like Bandcamp where a number of good looking merch options have also been made available. All of that being said, show some support if this music strikes your interest!

Now, for an album called “Stuck In The Present”, this LP seems to have its eyes fixed on the future! The songwriting is actually quite forward thinking on a number of fronts from the lyrics to the songwriting itself. In that way, this record has remained true to its Progressive side.

There’s a certain duality to “Stuck In The Present” drawn between some very clean Progressive Rock segments and a dirtier, more technical side. One can never be quite certain when these will flip on the first couple listeners but it certainly does serve to keep unsuspecting ears piqued.

As stated, the full album experience is composed from 8 interlocking tracks. They all bring something to the table to drive the LP forward. This ultimately helps “Stuck In The Present” run together as a full experience from front to back. Some of my personal favorites would have to be “Elevator In The Sky” which has some very nice, shifting passages and one of the album’s more intense moments, “Sympathy To Sin” through its notable earworms that only get stronger with every listen, “The Remainer” with its solar surfing prog vibes while showing off many sides to Face The Day right at the album’s opening (following the lovely “Stuck In Verona”, of course) and the intrigue of “In The Dying Sun” leading to the title track itself to close things out.

Even when a song doesn’t strike as particularly electrifying or lively, it always seems to have a key redeeming factor or an interesting flip halfway through. “Settle Down” and “With Faith On My Side” are great examples of this.

Also, a few notable guest musicians took part on the album. Notably, Martin has worked with the brain behind fellow Czech band Between The Planets through a number of mediums including a joint project called Martians. This album was no exception to his quality input as he added guitar layering on “With Faith on My Side” and electronic work on “Elevator to the Sky”. Furthermore, sax player Martin Plachý laid out a solo on “Settle Down” and multi-instrumentalist Jan Švec brought bass work on both “In the Dying Sun” with the fretless and the title track where he also played the cello. These all proved to be quality contributions towards the end product of “Stuck in the Present”!

To native English speakers, some lines on this album will likely be strange. Although, considering the songwriter is not a native English speaker, it’s easy to give that a pass in the context of this album. For what they are, the lyrics are actually quite good and creative, casting imagery and differing concepts through the listener’s ear. With an active imagination, this album may just land you in another galaxy.

The production backing this album is rather great. As mentioned before, Martin himself deals with both the recording and production processes but he also worked with Nicolas Fournier, Chris Sheldon, and Matous Godik on the album mix and he worked with Ed Woods on the master. As a result of all this, the final product sounds very sharp from beginning to end. Every instrument has its place within the mix and every element is allowed to breathe within the bigger picture.

Now, all of this is not to say we’re dealing with a perfect album here. There are some drawbacks to “Stuck In The Present” but, to be honest, it’s nothing major. I personally thought the songs function better together than they do apart. Some tracks lack a certain momentum or intrigue exhibited from others. Also, I think Martin is a really good songwriter but I wasn’t necessarily taken with his voice. That’s not to say it’s bad at all. It just didn’t necessarily wow me. It really just comes down to personal preference.

While in the present, we must ask how the future will judge us in history. We must gauge ourselves for the best outcome possible or fall by the wayside. Given this exercise, we have gauged the Face The Day “Stuck In The Present” album and to pass final judgment… it’s good! If you enjoy Progressive / Alt Rock music, this album is worth giving a go. There are different sides and twists to be discovered when listening front to back, making for an enjoyable experience. The largely DIY nature of the project is also quite commendable. Whenever listening to this record, I felt it deserved somewhere around a 7 and an 8 out of 10 so we’ll stick it at a well-earned 7.5. Very good.

Just to reiterate, streams of the music can be found above on this page and the album itself is available for streaming and purchase through Bandcamp. There are also plenty of merch options available to those who CLICK HERE. If you want to follow Face The Day from day to day on social networks, the option exists on platforms like Facebook, Instagram, Twitter, and YouTube. Go show Martin some love and appreciation for his music and keep in the loop! Also be sure to look into his present and past involvement with bands like Mindwork and Martians.