The D.O.O.D. Interview – Not your average Floridian band 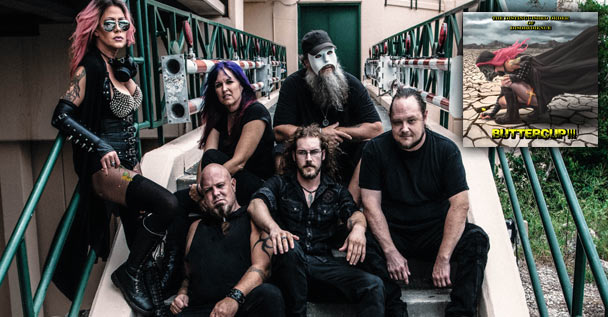 Introducing The D.O.O.D! On the rise from the southern reaches of Florida, this band has a flair for the theatric in their delivery of heavy metal music. This pours both into their music and their live show in a number of interesting ways.

Speaking of the music, the band just recently put out a new, post-apocalyptic album by the name of “Buttercup!!!”. This is currently available for purchase and streaming over on a number of major music platforms. You can CLICK HERE to grab it off their official store. You can also get an idea through listening to the links provided below!

Furthermore, if you wish to dig into more of the band’s lore and see how they do things firsthand, they’re active through a number of social media platforms. This includes the likes of Facebook and YouTube. You can also check the band’s Official Website.

Last, but certainly not least, we had the opportunity to catch up with the band directly for an interview! You can look over the conversation below to learn much more about their presence and how they tick. Enjoy!

We’re here with The D.O.O.D. First thing’s first, how the hell are you doing?

Brian: If we were any better we would have to be committed. Really good, busy times for us these days.

Let’s go back to the beginning. How did The D.O.O.D. come to be a band?

Brian: Raynus and Jonzey started this quite a few years ago, over the years there were many lineups, but ultimately about five years ago they approached me with an offer to sing for them, and we’ve been going strong ever since.

You just released an all new album “Buttercup!!!” What was the best part of making this a reality?

Brian: For me, it was being at a point where we got a chance to really stretch out a little, do some different things. In the end it all sounds very cohesive but individually there is a lot of different stuff going on, oh and probably the weird studio sessions where Ray would do these crazy backing vocals or we were all squished in a vocal booth-even Pinky-and doing gang vocals.

Roberto Mucho: Hearing the songs for the first time after the first mixes and hearing them exactly how they sounded in my head

Indy: The studio time, it was an excellent and fun experience. There were lots of laughs and great moments.

Pinky: For me it was the first time being more hands on and being involved a bit in watching the process and getting to be a part of a few songs as opposed to doing stage performance.

How has the band evolved moving forward from the “Beautiful Ride” EP?

The Beautiful Ride EP was actually some older material that we hadn’t had a chance to record on Playtime in the Apocalypse, but we started moving towards a stronger sound recording that EP. I think the band has really gotten to know each other musically a lot better on BUTTERCUP!!! and it shows. Plus the addition of Indiana was a nice topping on that cake.

Roberto Mucho: Personally, I took the time while recovering to study some different styles of drumming as well as some fav drummers that I’ve always admired as well as some that are new to me

Pinky: I think the band has gotten a lot heavier and more adventurous.

How would you describe The D.O.O.D.’s sound overall?

Brian: It’s very hard to describe for us, I’m sure most musicians say that about their music, but really we are just a heavy metal band, we fit in between a lot of the sub genres of metal. Its hard edged and driving yet thoughtful. And yet not afraid to have a little fun. I like to think we all take our favorite parts of metal and use that to create a sound that is unique.

Roberto Mucho: I think what makes our sound unique is that we all have these universal influences between us all and at the same time many different influences that come together.

If there’s a single track off “Buttercup!!!” you could show the whole metal community, which would you choose?

Brian: I would have to say probably Noose. It really has it all for me.

Indy: It’s very difficult to choose but I would have to say, The devil you know, Noose and Brothers. I can’t choose just one.

Pinky: Brothers, because of the inspiration behind it, especially because the feeling of love and togetherness it speaks of that I can feel being part of the Tampa Bay scene. We all work together and personally it is n honor to be a part of it.

Is there a concept behind the new album? The artwork, which pictures one of your bandmates Pinky DOOD, looks pretty interesting.

Brian: Musically rebellion and brotherhood is thematic throughout the album. The artwork (done by Benjamin Davis) was a little bit of a throwback to the first album Playtime in the Apocalypse. Our first album had the mysterious figure in the cape who was seemingly the angel of the apocalypse, and I like to think that this shows the human side of that angel.

Pinky: The artwork, a last flower in an apocalyptic setting is representative of beating the odds in a tough situation.

Is there a story behind your full band name The Distinguished Order Of Disobedience?

Brian: Jonzey tells this one better than me, but the name is actually the name of a medal given in Austria a long time ago to anyone who won a battle by disobeying a direct order. We go by the DOOD a lot because its hard to spell lol.

It looks like you guys bring a crazy live show! Do you have any good stories from your live events?

Roberto Mucho: Ha yes!!! My birthday show Brian had spit fake blood on me after singing happy birthday. Couldn’t hold onto the sticks after that!!!

Brian: Yes In Chin’s was an Indo-Chinese restaurant we played on tour last year. We came into this place after playing the Chance Theater-a beautiful old theater in Poughkeepsie New York, and its this little place where we played in front of a fireplace. The owner was this Indian fella who did not have a smile on his face as we walked in. As soon as we started playing, fake blood flying everywhere and I.m screaming in little old lady’s faces the owner busted out his camera and started taking pictures and laughing and having a great time as we were walking on Peoples dinner tables. He even asked for an encore.
You have a member whose sole purpose is stage performance which isn’t necessarily a usual thing. What was the motivation behind this?

Brian: Well first off I have known Pinky for years, we used to do these strange feature performances, (donkey shows where the donkey gets revenge, Friday the 13th sketches and such) and she had worked with Gen from the Genitorturers for a while. We had a Halloween show and asked if she would help out, and it went over great. From there we asked if she would like to do more shows. Eventually she just brought a new aspect to the live show and peoples understanding of the music seemed to grow quite a bit. She has a degree of professionalism that she brings with her that she became a part of the family. We have all loved bands like Alice Cooper for years and we just became a theatrical band.

Brian: I think it started with Raynus, he started wearing a mask because he felt more comfortable in front of crowds wearing one. When we got more theatrical in nature, the masks just kinda grew into part of what we do. I am a horror fan to the extreme and I have always found something very creepy about masks. They are an effective tool.

If you could have a guest feature on your next album from any artist, dead or alive, who would you choose?

On a similar note, if you could play a show with any 3 other bands, who would you choose?

How do you feel about the metal scene coming out of Florida right now?

Roberto Mucho: There is an incredible scene here in Flarida, full of unity, incredible talent and good people.

Brian: We are all very proud of the Florida bands, the scene is just incredible, especially in the Tampa Bay area. We are all a part of a metal family, which is apparently a bit strange, we tour elsewhere and have bands come through on tour and they even remark how there is no egos, no sense of competition, just the want to put together and put out the best metal we can.

Those are all the questions we have for you. Do you have any final words for the people out there?

Roberto Mucho: Be kind to each other, support local music, artists and merchants!!!