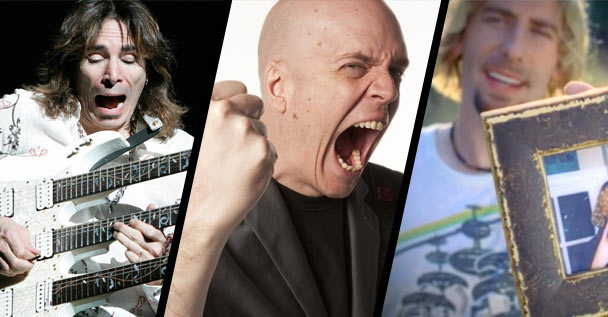 Devin Townsend just launched into a series of tweets making more announcements towards the release of his new album “Empath” to land in 2019. Among them, he says guitarist Steve Vai and Nickelback’s Chad Kroeger will be featured on the album.

To learn even more and see what other guest announcements and teasers Devin has let loose, you can CLICK HERE.

More specifically, he had the following to say:

“No sleep tonight. I’ve got the final stages of this year long process rolling through my mind. Almost done…another 3.5 weeks and this stage of it (the album) will be wrapped up.

Listened to the roughs of Empath on the flight and it had me teared up the whole way. I haven’t had this visceral a reaction to the work in many years. To think It all stemmed from taking a vacation! my god, what an intense period this has been. I’ll remember this past two years.

Thanks to some further guests, Anneke Van Giersbergen, Che Dorval, Chad Kroeger, Mike Keneally, Steve Vai, Lords Of The sound orchestra… it’s been total catharsis and tied intrinsically to the process of working through this transformation. It’s a lovely, complicated, weird one

Some people will totally love it, a fair amount will take awhile to have it sink in, some won’t get it at all, some will definitely prefer the bonus disk or the previous work, but fuck me, did I ever need to get this out of my system. It’s like 12 years of vomit at once…

I had a choice to either go commercial or uncompromised on this. Thanks to Garth Richardson and Chad for convincing me to not compromise. It’s a hard choice as you get older because the temptation to play it safe is huge for the sake of family and security.

Exhausting… pure catharsis. It was about middle age, realization, fear, death, moderation, meditation, and overcoming the internal dialogues. I guess it was ultimately about getting it right after all these years, then kind of realizing that you just have to let it all go…

Music is just an expression of gratitude I think. Ultimately it’s just another album in a long line of albums, some will like it, some won’t. But it appears as if it will be accurate, and that’s a huge huge relief.

Three drummers, two bassists, orchestras, choirs, ducks, cats, goats, birds, whales… and I didn’t sabotage this one, for once…

Have to be at the studio in 3 hours after a sleepless night. Sweet. Luckily it’s not an immensely complicated mix 🙄