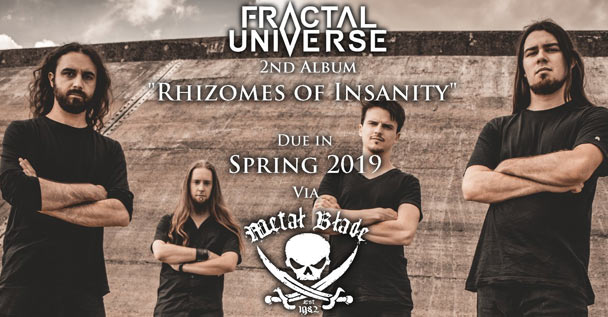 Metal Blade Records is proud to welcome Fractal Universe to its worldwide roster. Founded in 2014, Fractal Universe is a progressive death metal band from Nancy, France. They released their first EP, Boundaries of Reality, in February 2015, and played numerous shows in support of it, opening for bands such as The Black Dahlia Murder, Exodus, Monuments, and many more. With the release of their first full-length, Engram of Decline, in April 2017 via Kolony Records, Fractal Universe received even more exposure in international press, before touring throughout Europe and appearing at various festivals. Soon after, Metal Blade Records offered the band a worldwide deal.

Fractal Universe comments: “We’re thrilled to announce our collaboration with Metal Blade Records for the release of our upcoming album. The label has put out a countless amount of great albums over the years, that shaped our tastes in metal and contributed to making us the musicians we are today. Signing to them has been one of our main objectives since we started the band, and is really a dream come true. We couldn’t be more excited about the months to come, and we can’t wait to share the first tracks of the album with you!”

Fractal Universe’s sophomore album and Metal Blade Records debut is entitled Rhizomes of Insanity. Set to be released in spring 2019, Rhizomes of Insanity was recorded between May and July 2018, with drums recorded at Ghost City Recordings with Nikita Kamprad, and mixing and mastering handled once again by the band’s long-time engineer Flavien Morel of Boundless Productions Studios. Stay tuned for more news about the album coming soon.