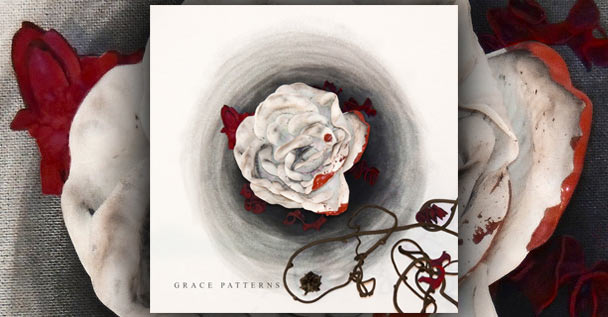 Why would one film the clouds? Most likely to capture moments of ephemeral beauty as they drift by, to pick out different shapes from the lines around one’s imagination, or just to appreciate the majesty of nature as a whole while appreciating how small we truly are in the grand scheme of things.

A lot of this could, more or less, be translated and appreciated through the work that the band He Films The Clouds does. This is a four-piece musical unit with no shortage of ability to bring the beauty right out of a song and put pictures in the listener’s mind. They prove this time and time again through the smooth, melodic songwriting they bring straight from the cumulus. However, much like clouds moving by, they don’t tend to stay still and dip through a number of metal and hardcore styles. So, don’t be surprised when it starts to hail from those cumulonimbus clouds!

They’ve proven their chops once again through the new EP “Grace Patterns” which just struck the world early this month! It effectively follows up the band’s first full-length album in last year’s “As I Live And Breathe” and the debut 2013 EP “New Beginnings”. All this work is currently available for streaming and purchase across platforms like Bandcamp, iTunes, and Spotify. We’re also streaming the experience in full via YouTube right now and the band also released a heavy hitting music video for the lead single “Senseless”, so you can find some links across this page to press play on!

There’s notable growth from the band’s previous offerings. The songwriting has gotten tighter and every instrument has room to breathe with standout moments across the EP. There’s no shortage of talent among the band’s four members and it’s put on full display here. It also comes across more clearly than ever before as they’ve continued to move up the echelons of independent acts in terms of professionalism in just about every from. Just from last year to today, they’ve made an incredible amount of progress across the board. Kudos.

One of the band’s key elements is bringing about buttery smooth melodic songwriting that just glistens through the ears. In this respect, you could probably compare and contrast the work of He Films The Clouds with the lighter end of band’s like The Afterimage, CHON, and even some recent Veil Of Maya and ERRA. They’ve pushed things on this front…

…As well as other fronts… The breakdowns and heavier moments found on this EP are frankly some of the most devastating I’ve heard in all of 2018. I can’t exactly put my finger on it but it’s something about the metallic bass tones they bring out that just absolutely melt ears off the head. They also have this tendency of lulling listeners into a sense of false security before dropping so much weight onto the track that mortal ears were not meant to experience. Interestingly enough, this effect only appears after getting into the EP a good bit. It doesn’t even arrive until the third track but it’s one of my absolute favorite elements He Films The Clouds brought with this one. For example, it arrives at 2:04 on “Worship” (maybe my favorite), at 1:28 on the lead single “Senseless” (which just gets slower and heavier later in the track), and 3:54 on the title track itself.

The production on “Grace Patterns” is fairly solid. The mix is effective in that it gives every element space to shine through. And, as I just blew up about for a whole paragraph or two, this record can both slap the ears and butter up the soul. For some reason, though, things sound a tad muffled like they could just be a bit crisper. It really doesn’t dampen the experience, but I noticed it since the single “Senseless” first came out (though it’s actually sharpened since the single release!).

Every track put forth on “Grace Patterns” holds a place in bigger picture of this EP release. “Your Gift” immediately shines through every member while showing off several sides to the band up front, therefore working as a great introduction. It hits with excellent instrumentation from every angle. “Sway” is extremely tasteful and delves into the band’s more melodic side like a swan dive. For lack of a better word, this fades gracefully into “Grace Patterns”. This is one the EPs most emotional moments as the vocalist proclaims, “I’m silently waiting for God” over chords that just bleed from the soul. It shows an even further duality, pushing excellent melodic songwriting and the EP’s first truly devastating heavy moment.

“Senseless” was just a great choice to be the single as it, once again, shows many sides to the band and gives the listener a few good kicks to the teeth. “Worship” has some awesome hardcore elements to it and a blast beat that I wanted to listen to some stupid number of times. It also has one of the EPs stand out bass sections which is soon overtaken by equally awesome guitar work. “Sand” does an effective job of closing things on a high note with some wickedly clean and hectic blasts, mixing all the band’s best elements, and also boasts a guest spot by Ross McCain from the band Sentiment.

No matter which track is playing, or which angle it’s coming from, there is an ever-present reality to “Grace Patterns” – it’s made of high octane, pure emotion. You can just feel it pouring out of every number. This energy is damn near undeniable and helps push the whole experience up a few notches as there’s never a dull moment.

For the most part, this effort is rock solid. There are just two primary criticisms that come to mind while listening (sans the earlier muffled comment). First, same as with their previous album “As I Live And Breathe”, the clean singing can be hit or miss for me. I think Xavier is a great all-around vocalist, especially on the harsh end and when it comes to insightful lyricism, but the higher pitched clean parts aren’t my cuppa tea. I’m sure plenty of other people will appreciate them and I actually really enjoyed the more reserved clean singing on this record. Second, the EP ends so suddenly that it’s kind of jarring. It almost sounds like it’s meant to launch into another track but instead it just cuts off (sequel territory?). I suppose wanting more will always be the bane of EP releases no matter how good they are, but I had to double check that “Sand” had actually ended the EP and it wasn’t just something with my sound system. It was kind of surprising considering how well the rest of the EP flowed.

After following the patterns of this EP for a few weeks now, I’ve come to the conclusion that it’s undoubtedly a great, multi-layered release that effectively shows growth from what is already a very talented band. In the end, my mind was hovering around an 8 out of 10 on this one so we’ll just leave it at that.

Something that really interests me about listening to He Films The Clouds over time is how aggressively they’ve grown as a band. I can only imagine what ground (or clouds) they may cover moving forward and I look forward to giving a listen! If you’ve made it this far in this review, it’s recommended you start to film these clouds yourself!

For now, once again, all the band’s music can be enjoyed through platforms like Bandcamp, iTunes, and Spotify. It’s highly recommended you visit one of those locales or just give a listen through the streams across this page.

If you wish to follow along with He Films The Clouds and see what kinds of greatness they cook up next, you can give them some love over on social networks. They’re established on Facebook, Instagram, and YouTube. They even have an official website you can visit to learn much more!