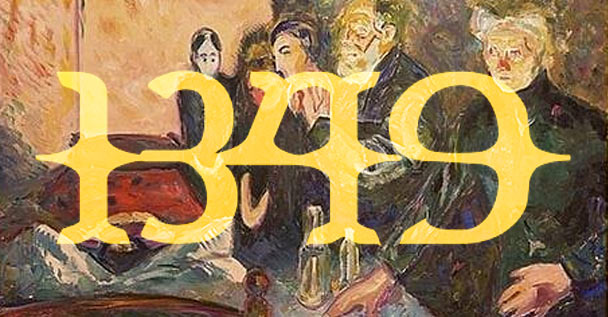 1349 just released a new a new single through Season of Mist. It goes by the name of “Dødskamp” inspired by the Norwegian painter Edvard Munch. Pre-orders for an upcoming 10″ release “Atomic Chapel” including this number can be found by CLICKING HERE. Limited to 1,000 copies.

The band’s guitarist Archaon had the following to say of this:

“Munch is unquestionably one of the most important Norwegian artists. His work is dark and eerie and reflects a lot of anxiety, pain, and loneliness in the way I perceive them. So it suited us perfectly.

I found this very exciting, especially as I’ve grown up with several Munch pieces on the walls. I chose the work “Dødskamp“, which directly translates to “Death Struggle” which speaks volumes for itself. It was an emotionally Heavy task, and also a completely New way to compose and execute [for us]. It created some very long, sleepless nights but in the end it was worth it. This is our soundtrack to the dilemma of mortality.”