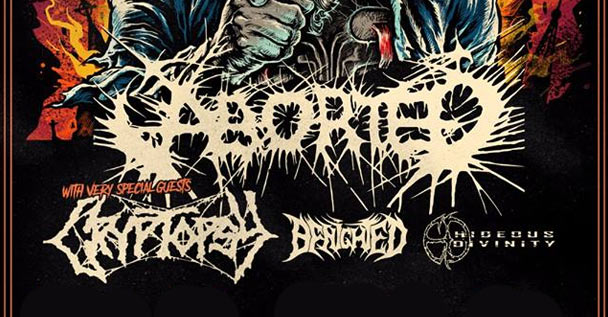 1/4/19 UPDATE – While the specific dates have yet to be unveiled, this tour will take place from Mar 21st – Apr 21st 2019. Furthermore, Benighted and Hideous Divinity have been added to this tour’s line-up! The talent level is too damn high!

Here’s the most recent word from Aborted in support of this:

We couldn’t be more stoked to be able to bring Hell over North America to you guys, not only do we get to spread death metal like an all consuming plague with our brothers from Cryptopsy and Benighted (who embark on their first North American tour ever), but the line up has been completed with yet another killer European band who have never been to the US before. We are very happy to announce our friends from Hideous Divinity complete the line up for the Hell over North America tour. Their latest album Adveniens kicked some serious butt and they are more than ready to rip everyone some new assholes. Double Doodie for Stefano Franceschini on this, so show him some good ole love and come on out to the blastbeat party! HoNA will be taking place between March 21st and April 21st, mark your calendars, full routing will be announced soon!

Here’s a few words Enrico S. wants to say about it: “We’ve had dreams about a North American tour since we started as a band. Some dreams are meant to stay that way… until now! Sharing the stage with ABORTED, CRYPTOPSY and BENIGHTED will be both an honor and a challenge! We can’t wait to bring you the “Angel of Revolution”!

Original Story – Aborted are going to bring the “Hell Over North America” tour for spring of 2019! They’ll be joined by no less than the juggernauts in Cryptopsy and Benighted. Dates will be announced soon…