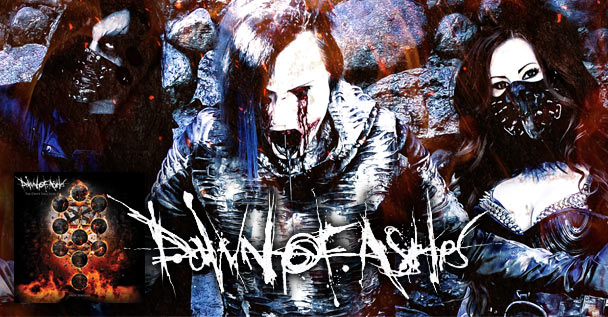 We recently had the opportunity to touch base with Dawn Of Ashes frontman and all around artist Kristof Bathory. They’ve been hard at work in this field for 18 years and the band recently put out the album “The Crypt Injection II (Non Serviam)”. This guides them, once again, down a dark Industrial Metal / Dark-Electro / Aggrotech path. As a result, there’s plenty of new content and highlights from the band to go around. If you’d like to learn more and give a listen, all you have to do is read on…

Besides the streams / music video below, the latest Dawn of Ashes music is available on just about all major music platforms. This includes the likes of Spotify, Apple Music, Bandcamp and more! You can also give Dawn Of Ashes a follow on platforms such as Facebook and Instagram. They also have an official website where you can learn much more about the band!

We’re here to speak with the folks from Dawn of Ashes! First and foremost, how the hell are you doing on this fine day?

Pretty good. Constantly busy and trying to keep my head always above water.

That’s certainly relatable. Very recently, you gave the world the gift of “The Crypt Injection II (Non Serviam)”. This is the latest album in the very complete discography you’ve built and the spiritual follow up to 2007’s “The Crypt Injection”. What prompted you to make the sequel and how has the fan response been so far?

I finally gave into the idea of bringing back an old familiar sound to Dawn of Ashes after the release of the debut Bornless Fire album. The Bornless Fire debut probably was the main and first reason for this idea. Our booking agent requested that we do shows for our old Industrial / Dark-Electro material which at first, I shut down the idea. Finally, after sitting on it for a few days I agreed to it. The idea also was presented to me to do another Industrial / Dark-Electro album and that was shut down as well. Finally, after thinking about all of the older fans, promoters, and other sources that told me to do this over the years. I finally gave in. I thought that the most appropriate name for this rebirth of that sound was “The Crypt Injection II”.

The biggest challenge was how to reinvent that world of Horror without the idea of murder, death, and hatred. Keep in mind, that the first two albums I was extremely angry, hateful, and self-destructive. That world has been redefined and remolded in my personal life, so this is was a huge challenge. I am currently in a Left Hand Path order and works with Qliphoth Magick which the Qliphoth is the tree of Daath / Death. Death in a metaphysical sense represents transformation. The Crypt Injection meaning is to inject death into life. This was perfect for what I am currently working with. On the Horror side, I wanted to touch on topic behind the ugliness of society and humanity and bring something real to the picture.

This album in my strongest opinion has shown a lot of maturity. I wanted to bring back our Dark-Electro / Aggrotech / Industrial sound and mold it with our Extreme Metal side to bring out something more unique.

Speaking of recent launches, you put out a brand new music video for the track “The Serpents of Eden” which came strapped with some impressive visuals! What was your favorite part of making this video a reality?

I think the best part behind the visuals and working on this video is how much it ties in with the lyrical and meaning behind the song. It has a huge Horror look to it but its no senseless and meaningless. In fact, it has strong symbolism throughout the video. I wanted something to be as accurate as possible. I refused to just throw in a bunch of spooky bullshit just to make it look aesthetically pleasing.

Your visual style comes strapped with a good bit of occult reference and even seems to dip into a unique take on Black Metal corpse paint. What drives this part of your presentation?

The visual and theatrical side of DOA is as important as is the music. I have always wanted our look to be top notch and not look corny. Black Metal has always been a huge inspiration and I have always loved bands that have a solid look. I feel that it just brings more to the package. I think this came into light, growing up listening to bands that has strong theatrical imagery. It’s always been something that I wanted to do.

On a similar note, you recently addressed your Christian fans in terms of your background, influence, and the fact that you appreciate them as fans despite any differences. What prompted you to do this?

I saw a comment from a fan that I feel I needed to address on a bigger level. I used to be very hostile and hateful towards Christians which was very juvenile. Since the path I follow is about molding the “Self” towards self-deification. It’s a path that is sacred to one’s individuality. In the current state of the message in DOA, is to offer open doors to another option. I am not here to force anything down anyone’s throat for two extremely important reasons. One is that if I did that, I would be like the hypocritical religionist that pushes onto others and two, this is a path for each individual to follow and create for themselves. I am not here to mold others, only myself.

This is a bit of a generic question, but I am curious given your mixed style – both sonically and visually – what would you say are your main influences?

Musically the two bands that always reflect inspiration are Nine Inch Nails and Dimmu Borgir. On this album there was a lot of musical inspirations from old Industrial to Black Metal to Hardcore and Punk music. I think the dark path of spirituality and Horror are the strongest inspirational side for the visual and overall content.

You guys put on an intense live show. What’s the craziest thing that has happened during one of your live sets?

I think throwing a kitchen knife through my foot. Nothing more can beat that.

Right now we are focusing on booking dates for touring. There is talk about another music video. Overall to remain busy.

What’s the story behind your band’s name Dawn of Ashes?

Now for a nerdy one… Given your visuals and music, I’d imagine you guys are into some great movies, books, and maybe some videogames. Any recommendations for the people out there?

Too many films I love but in the modern Horror / Sci-Fi realm, I would say; Hereditary, The Witch, Overlord, and Blade Runner 2049. Books, again too many on the topics that I study but I would suggest for beginners “Uncle Setnakt’s essential guide to the left hand path”. Videogames, Skyrim!

Now for a theoretical one… For a single trip, if you had to choose between a time machine and a space ship that could travel anywhere in the universe… Which would you choose and what would you go see?

Time Machine or space ship so I can get away from this awful state of society.

Now for a fun one… If Dawn of Ashes became a sports team, what colors would your uniforms be and what would your mascot be?

Interesting question since I am not a sports fan but I would say black and red. Mascot a dragon.

One more question about the band… Dawn of Ashes is a name that’s been hard at work for about 18 years now. How do you feel you’ve grown as a band in that time?

I can write a bible about this topic but I will sum it up in a very short answer. Lots of mistakes. A lot of learning from mistakes and a lot of dedicated hard work.

We’ve reached the final hour of this interview… Any famous last words for the fans out there?

Thank for supporting every decision that we have made over the years and sticking by our side. We hope that you enjoy the new album and hopefully we will see you on the road soon. 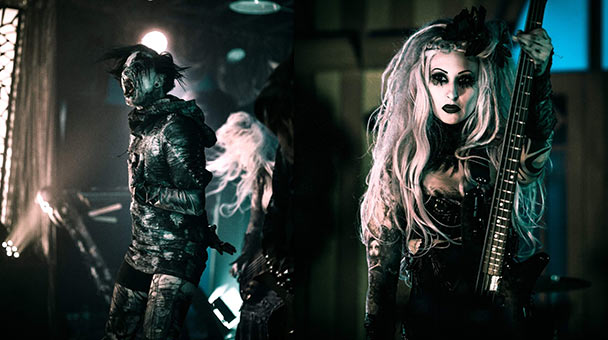