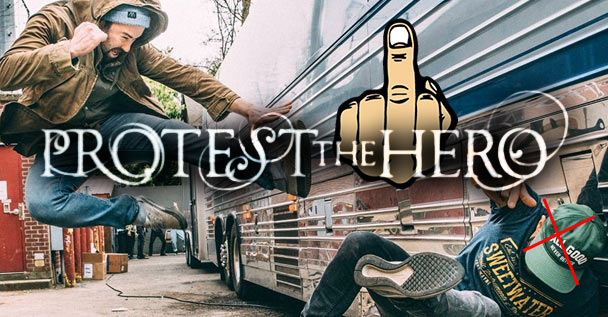 It would appear Protest The Hero have made great progress towards the completion of their highly anticipated new album! In fact, guitars, drums, and bass are complete. The only step left in Rody Walker’s vocals on top. Unfortunately, this may take a bit longer due to the vocal issues he’s been having.

Here’s the latest update, directly from the band:

“We apologize for the radio silence over here the past few months… We wanted to take a minute to update you all about our forthcoming record!

In January of 2018, we headed into the studio to undertake the behemoth that will become LP5. In that time, we’ve completed all the guitars, drums and bass and have been starting to put a dent in the vocals. Also, in that time, there have been 2 babies born, 3 tours, several minds lost and found again and countless slices of pizza consumed.

As some of you may have heard, Rody experienced some issues with his voice nearing the end of our Fortress X run in North America last year. When it came to tracking the new record, he was finding that the old voice just wouldn’t cooperate like it used to in the studio. Long gone were those 8 hour days of singing his greasy little balls off, taking a few shots of scotch when it got a little hoarse, then picking it back up the next day like nothing had happened. In today’s reality, this last piece of the tracking puzzle is taking longer than we had expected. Because of this, we are approaching things differently: tracking vocals in chunks rather than all at once. This will allow Choady to get the takes he is unwilling to move on without, while still giving his precious larynx the rest it deserves.

Having said all that, we are very excited about the way things are sounding! A couple facts about the recording process:

Our friend and former wrestler ‘Dez Nagle’ engineered and produced all of the guitars, bass and drums for the entire album. Cam McLellan played all the bass except for one song where we employed a very special guest bassist. Cam will be engineering and producing vocals with Rody the rest of the way. Mixing and mastering personnel are yet to be determined but are a constant source of email debate. Album titles, artwork, and release date are next on the list!

While we plan to keep relatively quiet until the record is completed, there is a near future in which you will wish we would shut the fuck up about it. Thanks for hanging in there and being so patient.”