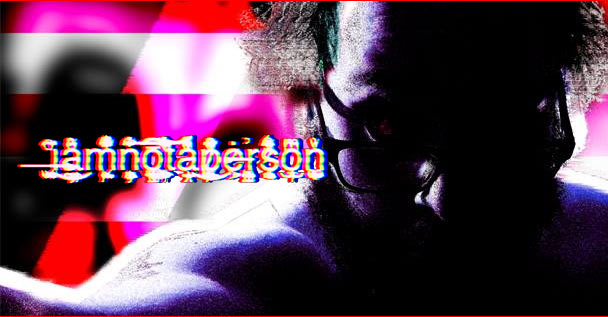 If this record wasn’t made by a human being, the world may very well be in trouble. Whatever made this record is very pissed off and very focused. But does it translate to some entertainment for us mere primates or does it fall flat of human understanding? Let’s find out!

However… Before we dig too far… You have the option to dig in for yourself through the streaming links strewn across this very webpage. Just buckle in and press play! You can also see about having the music added directly to your collection through a number of platforms. This includes the likes of Bandcamp, Spotify, Amazon, and iTunes among others. Physical copies are available to those who CLICK HERE.

“mourningsickness” follows up the previous iamnotaperson release “insidetheanomiemachine” which actually got quite a bit of love here at The Circle Pit in years past. And for good reason! That album was a great kick to the chest that also did its best to stand apart from the pack. It would appear that tradition has continued into 2019 with the new LP…

It bears saying that all this music grows from the mind of a one man band. At the surface level, it would appear that he’d like to remain incognito. However, it is publicly known his whereabouts center on Muskegon, Michigan (previously the uninhabitable Centralia, Pennsylvania). He single-handedly creates a sound that could be positively compared and contrasted with contemporaries such as Nemertines, The Tony Danza Tapdance Extravaganza, and Korn. That’s saying a lot in the grand scheme of things.

It all reflects positively here. This is a very strange and experimental record release out of a field that seems to be growing more stagnant. For that, I absolutely must give iamnotaperson respect. “mourningsickness” is a derailed and visceral experience that also manages to be quite engaging and entertaining. It most definitely stands out from the pack through sheer creativity backed by brainpower.

Showing no fear in stepping outside the box is perhaps this album’s most admirable quality. So admirable, in fact, it even works to overcome any shortcomings found across the record. However, we’ll touch more on that later.

There’s a lot of cathartic anger lining the tracks of this album. I’d even say it goes as far as sonic violence considering the tracks blast and clip at extreme levels of audio. What loudness war? This causes the experience to be very abrasive and distorted at times. However, rest assured that this is intentional and ultimately adds to the overall atmosphere and feelings pushed by iamnotaperson. Strangely enough, this is a record that sounds damn heavy while listening at both high and low volumes. There’s a nasty tone on this thing. The guitars, compression, and clipping want to crush your ears into pus.

There’s a whopping 20 tracks strewn across the spread of this album that ultimately clocks in at a 44-minute runtime altogether. That being said, there’s no shortage of content or entertainment to go around while experiencing “mourningsickness” from front to back.

As for breaking into these 20 tracks, a number of favorites will surely pop up. Off the top of my head, a few numbers come to mind. The massive grooves of “The Things That Are Hidden” are damn near undeniable and the layering work is well done, “Becoming Unhuman” has some very nice progressions which build to a memorable climax, “When Nothing Means Anything” is just devastating on a number of levels, “Love Leach” has a nice control of tension which explodes towards the end following some initial heaviness, and I have to note the raw hitting emotion of “After You Left, Everything Died” towards the end.

It’s also interesting to note that every track that ((startsandendswithdoubleparanthesis)) is an instrumental transition / ambient piece. These take a number of forms but effectively move the album along without pause.

It’s not all sunshine and daisies though… There are some weaknesses surrounding this album. For example, I wouldn’t say the clean vocals are something to write home about despite being effective in the way that they’re written in. It actually reminds me of Johnathan Davis from Korn in some ways. Furthermore, the production can be fairly rough at times and isn’t afraid to clip, etc. However, as I said earlier, I believe this is intentional. The sheer amount of risks and experimentation behind “mourningsickess” easily make up for or even cover over these spots. I truly believe this album is meant to be dirty sounding, akin to something lost in a digital abyss. Finally, despite being intentionally abrasive, the sound can be a bit much at times. Most of this will, of course, come down to personal preference.

Following the physical discomfort of “mourningsickness”, we must make a final call on the experience as a whole. When push comes to shove, this is a good record. It may even be a great record to some. It’s a brave and angry fuckfest for the ears that will transport the listener to some very dark corners of the mind, boiling blood and kicking in teeth. Ultimately, it’s quite enjoyable from front to back and I’d easily recommend it to those with experimental modern metal leanings. In the end, I’m feeling somewhere between a 7.5 and an 8 out 10 on this one. So let’s round it up and mark an 8.

Keep in mind that you can give a listen to this album for yourself via the links provided up above on this page. You can also grab the music for your collection through the following links – Bandcamp, Spotify, Amazon, and iTunes among others. Physical copies are available to those who CLICK HERE.