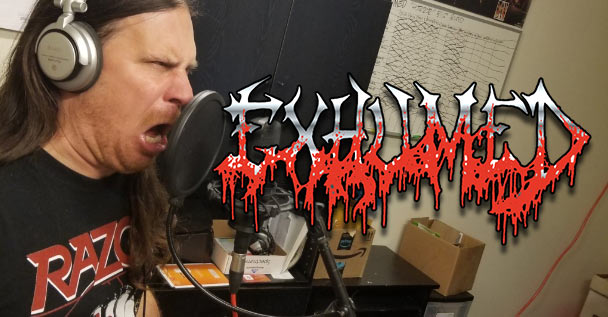 Exhumed are back at it! The band have taken to their own Darker Corners studio to create what will ultimately be their seventh full-length effort. This will also be their first with Sebastian Phillips (Noisem) as a guitarist

This will largely be self made with Alejandro Corredor (Brujeria, Nausea) and Joel Grind (Toxic Holocaust) being brought in for production and the mix / master respectively.

The band’s vocalist/guitarist Matt Harvey had the following to say of this:

“This album has been a challenge in a whole new way, part construction project, part trial-and-error crash-course, and part Deathgrinding madness. The Deathgrinding part has been going really well, and we’re really focusing on bringing out the aggression of these tunes. The goal is to leave no face un-melted.”

You can learn more by heading over to the Relapse Records website.