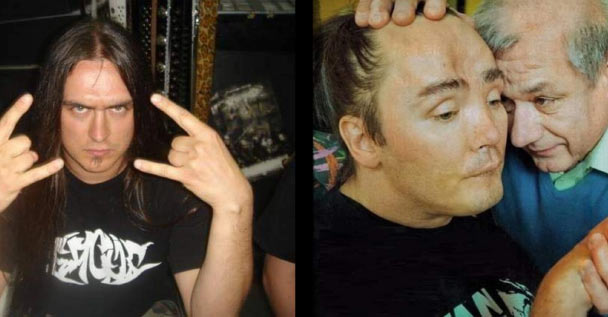 YOU CAN DONATE HERE

Back in March, i did a fundraising to help paying a tiny bit of Adrian’s expenses since everything is paid by his parents. I visited them end of March and i had the chance to discuss with his dad Leszek about his current situation and needs. If you don’t know Adrian, he used to be the vocalist of the Polish death metal band Decapitated and recorded the album Organic Hallucinosis with them in 2006. In 2007, the band had a tour bus accident in Russia that led to the death of their drummer Vitek and the injury of Adrian. He suffers from cerebral hypoxia and is totally paralyzed since then.

Talking to Leszek, he mentioned that Adrian needs a new wheelchair: they bought his current one used in 2007 for 7 years which means this wheelchair is 20 years old!!

Adrian can’t have the least of a quality time since his wheelchair is too old (as you can see in the photos) and they aren’t able to take him for long walks or anything.

For Christmas, i want to help them to get him a new wheelchair (a Carony wheelchair system, made in Sweden) which will allow them to get him into the vehicle while sitting, by transforming the car seat into a wheelchair and will completely eliminate the lifting during the transfer (which can be dangerous in his case).

All in all, the wheelchair and the modifications they have to do for their car to be able to use it, will cost them around 9500 euros. This is kinda big amount that they find hard to afford since they are forced to pay as well the therapists and the treatments he needs monthly by themselves.

Thanks to everyone who helped in March and i’m hoping some people will help again by donating and/or sharing!

Help Adrian aka Covan. He used to be the vocalist of the Polish death metal band Decapitated and recorded vocals on their album Organic Hallucinosis (2006).

After their tour bus accident in Russia (2007), they lost their drummer Vitek and Adrian got injured badly: He underwent a highly complex neo surgical operation which showed success at that time. 36h later, he experienced breathing problems and due to some medical negligence he ended up suffering both cardiac arrest and cerebral hypoxia (an impairement of brain function due to low oxygen levels in the blood). After being in the hospital for 6 months, he was brought back home.

Today, Adrian is paralyzed. He needs daily expensive therapies that are very hard to afford by his parents.

It would be nice if people would donate to help them out a little bit.