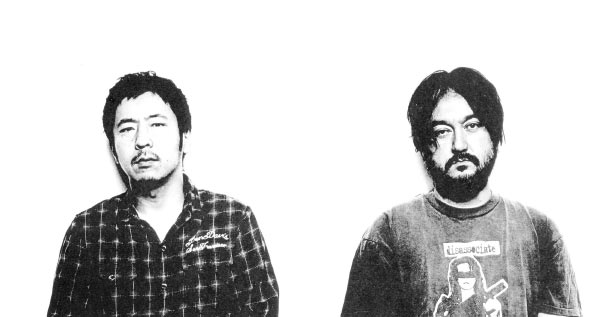 Not full-on doom metal, not quite blissed out stoner, not math rock, not beard-stroking instrumental, not shoegaze….and yet Tokyo’s STORM OF VOID somehow manage to seamlessly combine elements of all the above into one thrilling, leviathan whole on debut album ‘War Inside You’, released back in September 2017 through Hostess Entertainment.

The fact that such a staggeringly enormous sound comes from a duo shouldn’t be surprising considering the pedigree of those involved. 8-string guitarist George Bodman cut his teeth in indie rock/emo pioneers Bluebeard and Naht and moved on to play in Toyota’s punk rock orchestra Turtle Island, whilst drummer Dairoku Seki does double duty in one of Japan’s best-loved and most successful post hardcore bands, envy. Having released a self-titled EP in 2013 on Sonzai Records in Japan, the band proceeded to slay stages nationwide, becoming a key player in a burgeoning domestic independent scene alongside such luminaries as MONO (Temporary Residence), Lite (Topshelf Records), Endon (Hydra Head Industries) and of course envy. On ‘War Inside You’, their debut album, the band supplements their heady instrumental freakouts with guest vocal appearances from Mark ‘Barney’ Greenway (Napalm Death) and J Robbins (Jawbox, Government Issue) adding a previously undiscovered dimension to their already thrillingly progressive soundscapes. Check out the sinister video accompaniment to ‘Bow & Scrape’, on which Barney features: https://www.youtube.com/watch?v=wq9XpLVZ93U

When not riffing til his fingers bleed, George is well known and well loved in Japan as a local Tour Manager and Guitar Tech for some of extreme music’s leading lights, having worked with a plethora of bands such as Melvins, At The Gates, Mayhem, High On Fire, Emperor, Killswitch Engage, Napalm Death, Brutal Truth, Sleep and so on. In his capacity as local TM he has forged bonds with these bands and brought Storm Of Void into the consciousness of some of the most popular acts in the extreme world. Prior to playing in Storm Of Void, George played in Turtle Island and Naht, both of which enjoyed not inconsiderable international success.

Dairoku is perhaps most well known as the drummer in Japan’s best loved and most internationally successful post hardcore band, envy. Booked by Justin Waterbridge at The Agency/UTA, the band has played in all corners of the globe over the last decade and more, perhaps most notably at All Tomorrow’s Parties and France’s annual gathering of the titans of heavy music worldwide, Hellfest.

Since the band’s inception, STORM OF VOID has toured exclusively in Japan, playing shows with a wealth of well known extreme bands, including MONO, Cohol, SOB, Doom, Hellchild, Endon, Greenmachine and a host of others. The band members’ undoubtable pedigree comes from years of playing around the globe at some of the most celebrated music events in the world. Not content with limiting themselves to their native country, the band now have their sights set on taking their gargantuan riffs to all corners of the globe. Turn on, tune in, rock the fuck out.