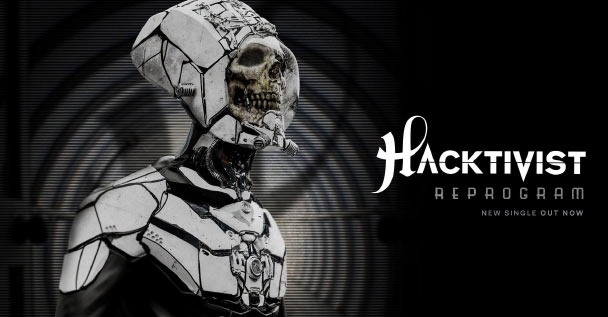 Hacktivist just launched a new single by the name of “REPROGRAM”, complete with a new music video which you can enjoy below.

This is the band’s first output with new guitarist James Hewitt.

The band’s new guitarist James Hewitt had the following to say of this:

“Having taken a couple of years away from the music industry, I’d started to miss writing music and playing live…and then comes the opportunity to join Hacktivist. Having played some shows together previously, I’d been friends with Josh and Rich for a few years – I think that helped things click very early on in terms of writing. We’re constantly firing ideas back and forth and have plenty of songs finished, and already playing a couple of the new ones live. They’re going down great so I can’t wait to add some more into the set!”

Jot Maxi, one of the band’s vocalists, had the following to say:

“When I joined the Hacktivist ranks, I thought that a new front-man was all they needed and once I filled that role we were ready to get to work creating insane conscious futurist music like never before! Though I quickly realized there was some further internal defragmentation required and the writing of new material had to be put into hyper-sleep for a bit longer than we’d have liked.

Our live shows however are always in high demand and we’ve stayed active destroying it on stages all over the place! Finally, now that James Hewitt has enlisted as our new guitarist/producer there is a true sense of unity between the five of us and I’m beyond ecstatic that everyone will get to hear not only the ground-breaking new flavors he has brought to H, but the warp drive energy and lyricism that’s been burning in me to contribute to the future of Hacktivist ever since I came on board!!”