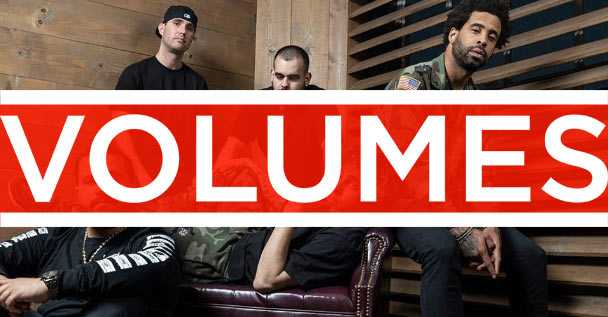 Following a successful headline tour and run alongside Born of Osiris, Volumes devoted nearly eight months to piecing together their next musical chapter. They recorded throughout Southern California, working out of Butter Studios in Venice, West Alley Recording Studios, and Farias Productions. Self-producing and keeping everything “in-house and organic,” they enlisted Kyle Black (Pierce the Veil, New Found Glory) and Max Schad (Veil of Maya) for an additional perspective.

Ultimately, Coming Clean represents a moment of clarity both personally and artistically.

“Some of us have struggled with depression or drug issues,” admits Soudani. “We’ve battled those demons personally and together and found a nice stability and substance. At the same time, we’re coming clean with ourselves. We’re men now. Life is more precious. The music reflects this honest idea of opening up.”

Volumes introduce this era with the bludgeoning banger “No Love” (featuring Fronzilla) and it’s Volumes’ heaviest declaration yet with an uncanny assist by the Attila frontman and longtime friend. “It speaks on the idea of how we’ve come from the bottom and the dirt, but we’ve been here a long time, so you’re going to have to show some respect,” Soudani states. “We know where we stand. We’re asserting our identity. We’ve found ourselves and know what we’re doing.”

Elsewhere, “Alive” slips between the cracks of caustic guitars and punishing growls into a soaring clean refrain, “Am I alive?” Then, there’s “Until the End.” Evocative of what Soudani calls “the original Volumes sound,” it illuminates the dynamic range of their attack, seesawing back and forth from a visceral vocal volley into a harmonic reprieve.

“Coming Clean is an emotional moment for us,” Soudani says. “I hope you feel something when you hear it and gain some perspective. This is Volumes. Coming Clean hints at where we’re headed in the future.”