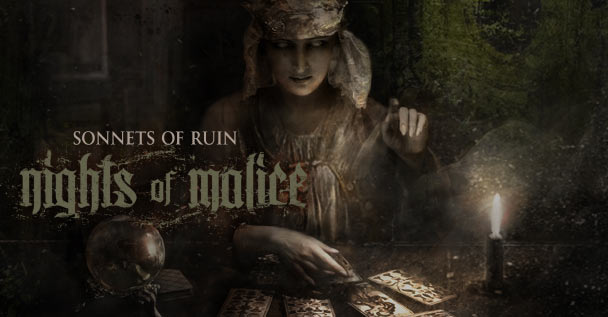 The surroundings are dark but for a single candle seated on a table at the room’s center. Upon closer inspection, one can see a series of tarot cards shifting under the gaze of the flickering light, twisting tales of an untimely doom for the observer. This end will be brought about by… metal!

Nights Of Malice are proving to be among the more dangerous forces emerging in the landscape of modern metal. They’re absolutely ruthless in their delivery of heavy music and it has shown since their inception about 5 years back. In that time, they’ve released 2 solid albums and an EP along with a few singles. Clearly, they’re not a group to rest on their laurels.

Today, we’re focusing on the latest output from these Ocean Country, New Jersey natives, an album by the name of “Sonnets of Ruin”. It just hit the ears of this mortal realm on the tail end of last month. This LP brings about a continuation of the band’s sonic hybrid of Deathcore and Death Metal with a few twists to boot. Having directly covered their previous release “Our Penance” as well, it has to be said this feels like a natural progression from the band and it translates nicely into the final product.

If you wish to give “Sonnets of Ruin” a spin for yourself, links have been provided across this page. You can also grab the goods on most major online music platforms including the likes of Bandcamp, Amazon, Spotify, and iTunes among others. They also have physical copies and merchandise you can peruse by CLICKING HERE.

Now, let’s examine the smoldering ruins left in the wake of this band’s latest effort…

If one were to describe this album with a single word, heavy would certainly be appropriate. Nights Of Malice provide a massive wall of sound to land right on the listener’s ear drum. However, when all the factors are added up, there’s much more to “Sonnets of Ruin” than heaviness for heaviness sake. These songs are all well thought out in terms of composition and tension, making each impact count when the musical hammer falls.

There’s a definite tone to the duration of this album. Every track put forth clearly belongs with its neighbors as they all weave the fabric of the greater experience put forth. There’s no sense of inconsistency here which proves that Nights Of Malice know what they’re doing when it comes to crafting an album.

The biggest outlier of the bunch would have to be the intro track if any. The record opens with the haunted piano keys of “CCXVI” which are soon joined by strings. This all boils up to the first full track of the album – “Staring Down the Black Throat of the Snake” which hits like a good kick to the chest. It also does an excellent job of introducing listeners to the approach of this album without pulling any punches.

There are several high points to be found among the greater track list. Moments like “Gaea” and “A Myriad Misfortunes” certainly come to mind for serving as explosive singles before the record even dropped. “The God Machines” is a very nice bit of side step, “When Death Comes, We Will Eat” is a warzone for the ears, and I also must give a nod to the 7+ minute title track and closer which diligently closes out the experience and brings back some of the haunted atmosphere from the beginning. In truth, there are no weak links here! Just listen to the whole damn thing if ye seek heaviness and you’ll likely find that it fits your needs.

At worst, I would say this isn’t the most original record I’ve listened to but I don’t really think it’s trying to be at the same time. One can easily draw parallels to some contemporary greats from the Deathcore field like Fit For An Autopsy and Thy Art Is Murder and it’s safe to say Nights of Malice do a great job themselves.

Speaking of Thy Art Is Murder, there are two notable features on the album. One of which comes from TAIM front man CJ McMahon himself on the single “Gaea”. The other is delivered by Cody Harmon from The Breathing Process and I Killed Everyone on “When Death Comes, We Will Eat”. Both of these come across quite nicely.

On the note of notable attributes outside the band members, the record was also recorded, mixed, and mastered at no less than Think Loud Studios in York, Pennsylvania by Carson Slovak and Grant McFarland. These are the same guys responsible for recording work by August Burns Red, Rivers of Nihil, Lorna Shore, and countless others. They’re also both part of the Star Wars themed metal band Galactic Empire. All of this is to say that the final product of “Sonnets of Ruin” sounds great!

To wrap things up, I’d also say the whole package of “Sonnets of Ruin” is just great in general. The band went in with a mission and they delivered in kind. Running through this record is equal parts satisfying and devastating. While listening over the past few weeks, my gut placed this album somewhere between an 8 and 9 out of 10 so we’ll just round it off at an 8.5 out of 10. Very well done.

Once again, if you’d like to give the goods a listen, you may do so by checking any of the streams provided above. The music is up on Bandcamp, Amazon, Spotify, and iTunes among other locations.

You can also give the band a follow through various social networks. This includes the likes of Facebook, Instagram, and Twitter. Any and all support for Nights of Malice is well deserved! Now go forth and enjoy the metal!