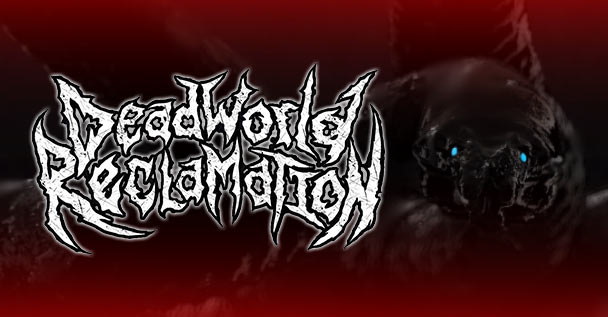 Quite the Melodic Death Metal force are making themselves known from Arizona. They are Dead World Reclamation and they’re among the most promising in their field with no shortage of potential leading up to their forthcoming album!

We recently featured their monstrous single / 3D lyric video “Drowned Beneath Fang & Scale” as a mere taste of what’s to come. Now, we’ve dug in deeper with a series of interview questions to unearth the band’s current status and motivations. They also divulge some new info on the villainous concept of the upcoming LP!

Read on to learn much more and prepare your ears for what comes next!

We’re here to speak with the talents in Dead World Reclamation! How are you guys doing?

Pretty great! Pretty fresh off the heels of a show with an Archspire for the Tech Trek IV tour; we got to open the Arizona stop for those dudes, Inferi, Virvum and Wormhole! So we’re still feeling pretty amazing after getting to share a stage with so many talented musicians.

That is one hell of a line-up! Let’s dig into some recent music first and foremost. You guys just launched the monstrous single “Drowned Beneath Fang & Scale” with an impressive video to boot. How do you feel about the response to that so far?

We’re honestly ecstatic beyond words with the reception to the single so far. We’re still a very new band and we’re in the process of discovering the sound that defines us. There’s been a lot of growth as musicians between our first album and the newest single, so to get such an amazing response to something so many people (Jeremy Davis, tracking/mixing/mastering us at Meta Sonic Studios. Josh Gillepsie of Deviant Multimedia Productions producing a phenomenal lyric video for us!) have put so much time into has left us absolutely amazed.

Speaking on the new material, you recently went through some changes as a band by adding a new vocalist in Conner Posz and a new bassist in Alex Beltz. How have they complimented the Dead World Reclamation sound?

Conner and Alex have fit right into the band seamlessly! That’s part of the reason we were so excited to get the single out, we were so lucky to find two people that complimented both our sound and personalities so god damn well, so we wanted to show everyone what the new line up has to offer!

Rumor has it there’s a new Dead World Reclamation album on the way! When can we expect to hear that?

Absolutely! We just finished writing for a second album, we’re hoping to have it out by the end of the year, but we’re definitely going to keeping The Circle Pit and everyone else updated on the status between now and then!

Mythology weighed heavily on the content of your new single “Drowned Beneath Fang & Scale”. Very strong lyrics. Will this continue to be a theme on the rest of the record, or will it explore different territories?

Yes, somewhat on the mythological front! So, the new album is another concept album in a sense; every song deals with a different monster or villainous entity through both mythology and popular culture, and tells a story through a (hopefully) interesting perspective.

That’s awesome! On that note, time for a fun round, if you could steal the powers of any mythological entity for a day, who would you choose?

We’re taking the powers of Midas, with that golden touch. Gear’s expensive, and a solid gold version of my shitty car would could probably cover the cost of the all the upgrades we want, haha.

How have you guys evolved since the previous album “Sentient”? You guys were quite conceptual with that one as well.

We’re pushing ourselves with this new album. We tried to step it up from every aspect, from riffs to orchestration, to Conner’s vocal performances, we want to make sure we’re constantly improving and reflecting that in our writing. There’s no such thing as a talent ceiling when it comes to metal, so it’s always our goal to practice and improve as much as possible, not just for ourselves, but for anyone out there who enjoys our music enough to support us in any way possible. Complacency kills dreams, and we’ve got some big dreams that we’re trying to chip away at so we need to keep trying to get better!

Speaking of “Sentient”, you guys had a memorable guest spot from former The Black Dahlia Murder guitarist Ryan Knight on your previous album. Should fans be looking forward to any more collaborations?

We were stoked to have Ryan on the last album, as far as future collaborations, we’re going to have to keep you guys posted going forward!

Fair enough. Do you guys have any live shows or tours coming up?

Nothing planned as of right now, although we are hoping to do some touring after the release of the new album.

Any favorite stories from playing live?

Well, Andre once showed up to a show with all of his gear, ready to go, and then realized he’d left his guitar at home and had to drive two hours round trip to go get it. Does that count? Hahaha.

Definitely haha. And another fun round! If you guys could play a show at any location in the world, where would you choose?

We’re shooting for Europe, haha. Honestly if we ever get an opportunity to hit anywhere over seas we’re taking it.

Arizona seems to be putting out some great bands recently! I’ve personally enjoyed your music, Gatecreeper, I Pariah, and Woundvac among others in recent history. How do you feel about the metal scene in Arizona right now? Any recommendations?

The Arizona metal scene is killing it right now! We’re got some great local powerhouses, of course Gatecreeper, I Pariah and Woundvac, but you’ve also got the likes of Singularity, The Exiled Martyr, Oppressor God and so many more!

Final fun round! If you had one round trip to see anything in a time machine, what would you choose?

1000 years into the future. Let’s see if guitarists have been finally been replaced by machines as well.

That’s all we have! Do you have any last words for the fans out there before we wrap?

Thank you for support! For checking out the new single, for streaming Sentient, for all the kind words over the last year or so! Stay with us, we’re so excited to get the new album recorded, and we hope you all enjoy it!