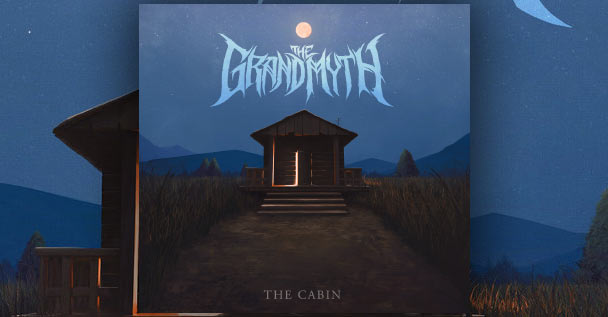 Today, we’re here to enjoy the exploits of an artist who did just that! Introducing The Grand Myth. This is a Las Vegas based solo project powered by the mind of the all-around artist Brandon Bordman.

He set out with The Grand Myth as a vehicle of proving to himself that he could write a near full record on his own accord. It would appear that he was successful in this endeavor because 10 months of effort churned out the EP that stands before us today… “The Cabin”! He handled everything from the the composition itself to the recording on these tracks, only outsourcing the mix and mastering duties to Jonas Vece. Congratulations to the man for setting a goal and sticking to it!

That being said, the question stands if the results are any good… That is to be determined in this very review!

However, before we dig in too far, it’s recommended you give a listen for yourself and make up your own mind. Various streaming links can be found across this page and the “The Cabin” is also available on most major online music platforms. This includes the likes of Bandcamp, Spotify, iTunes, Apple Music, Google Play, Tidal, and Deezer among others. Enjoy!

Now, let’s enter “The Cabin”… This is a 5 track endeavor spanning nearly a 30 minute runtime. Through its duration there are peaks and valleys to be ventured with no shortage of content to go around despite being an EP.

The record opens with distant sweeping winds and the cries of insects through an outdoor atmosphere. This bit of sound design sets the stage in a way that quite literally feels like sitting outside “The Cabin”. This is soon joined by the crashing of a beautifully ominous melody all building towards the EPs first proper full track “Empty Vessel”. Despite what the title might indicate, this track is anything but empty! In fact, it does a good job of introducing several of the primary elements found on this album. It has the riffs, heavy hitting drum patterns, screams from the guts, and more.

The clean singing (also from the guts) is actually introduced on the next track “Sufferer”. This can be a bit hit or miss but there’s no denying Brandon’s passion behind all the vocals put forth on the EP. Moments like the tortured distortion belted out on the single “Simulating Stars” come to mind.

I’d say every track on “The Cabin” has something that makes it stand out from the pack while simultaneously working towards the greater good pushing the EP. Even so, the sound refuses to conform to any single approach through the records duration. No one can truly anticipate what will happen next on a first listen.

“A Light Beyond” is probably my favorite track on the record. It’s an 8+ minute exhibition of metallic fury that ultimately culminates all the ideas put forth on the whole of “The Cabin”. And it’s safe to say those ideas are many.

In some ways, this EP feels like a true debut effort in that there’s a bunch of experimentation, raw talent and a bounty of ideas that are pitched against the wall to stick. You can tell Brandon didn’t pull his punches while constructing “The Cabin”. It all makes for a raw and passion filled amalgamation of music that can easily leave a lasting impression on the listener’s ears.

Unfortunately, on the other hand, I have to say the production behind this record is not great. It’s decent but it’s certainly one of the main things holding back The Grand Myth’s sound. From the guitar tone to the mud in the mix, this one could use some help. In speaking with Brandon, he said he wanted a natural, non-quantized approach for the record which I do think is admirable philosophically but maybe not as much in practice with this particular case. As with just about any music, it sounds best at high volumes!

To his point, however, it’s refreshing to hear something that’s not polished to hell and back again. There’s a certain honesty and integrity found with each passing track here.

That being said, there is certainly still additional love and attention given after the initial recordings. Moments like the intro track and the transition from “Simulating Stars” into “A Light Beyond” come to mind as high points for creative sound design from The Grand Myth.

Just as a total side note, I also want to shout out the awesome cover art made by Eddie Schillo who’s worked with The Dear Hunter among others. Really helps set the tone of presentation for this record, especially in conjunction with the intro track!

When push comes to shove, it’s safe to mark this one down as an enjoyable record. It has a good bit going for it despite some setbacks and ultimately serves as a testament to the possibilities behind The Grand Myth. In the end, I’m feeling a 7 out of 10 on “The Cabin”.

Once again, if you’d like to give this EP a listen, streaming options can be found across this page and it’s available on Bandcamp, Spotify, iTunes, Apple Music, Google Play, Tidal, and Deezer among others.