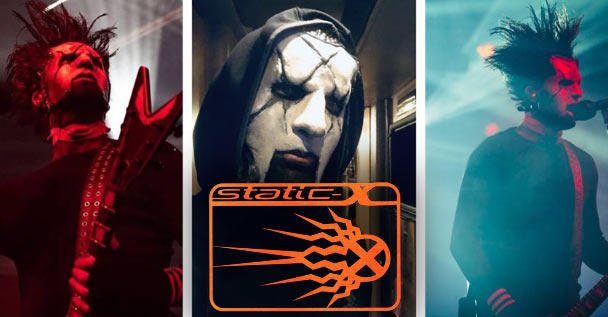 The current Static-X singer, only known as Xer0, filling in for the late Wayne Static has released a statement about the former singer and his experience with the band. This can be found below.

Static-X are currently on an international tour with many dates. They can all be found by CLICKING HERE.

This is the statement left by Xer0:

“Dear Static-X fans around the world.

Now that the opening night of the tour is behind us, I wanted to personally take a moment to say thank you to all the fans for being so incredibly warm to me.

This is a very unique situation and I was asked to fill the enormous shoes left behind by our dear friend Wayne Static for this 20th anniversary tour..

I absolutely understand the sensitive nature of my role and I have approached this with the utmost respect.

I knew Wayne for the better part of 15 years, as we toured together extensively and I’ve considered him to not only be a colleague, but also a friend.

Wayne was an amazing talent and my goal has been to represent him and to honor his legacy with my performances each night.

I have reached deep inside myself to grow and expand my vocal capabilities to serve this experience to the best of my ability.

The first couple of shows have been unbelievable. The response has been incredible. The band, the fans, everyone is feeling the emotion and power of these shows.

I know that Wayne would be so proud of this memorial and he would be blown away to know that so many people have come out to celebrate his legacy and the music that he and the guys made together back in the late 90’s.

I’m not sure that anyone could have imagined so many “sold out” shows exploding with the sounds of Wisconsin Death Trip 20 years later.

I want to thank Tony, Ken, and Koichi, for believing in me and for allowing me to be a part of this.

I am honored and humbled by the overwhelmingly positive response.

I’m going to bring it each and every single night for my old friend Wayne Static!!!