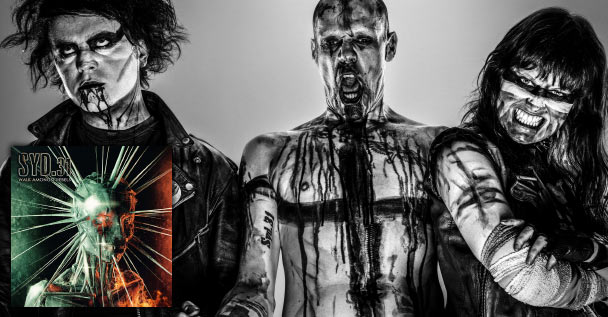 Syd.31 are an Industrial Metal force making a mark from the United Kingdom. They’re currently standing on the precipice of releasing a new album “Walk Amongst Rebels” which is set to officially hit on June 24th with pre-orders available to those who CLICK HERE.

We recently had a chance to catch up with the band and speak on their approach to music. You can learn much more by reading here:

First thing’s first, how the hell are you doing?

Kara – I feel like I’ve jumped through the 7th circle of Hell due to injuring my neck and shoulder from our last gig! Other then that I’m great!

Shavo – Errrr…..God, I’m nursing a hangover and I cant even think.

Let’s start with a fun question. If you could play a show at any venue / locale in the world, where would you choose?

Kara – Venice, always Venice, any venue as long as its in Venice

Dr Magic – my Manchester friends will take the piss out of me for this one, but its probably Manchester venues like The Ritz, Albert Hall or The Salford Lads Club. I moved over 6,000 miles to live in this city, due to its music history and culture.

Shavo – The 100 Club in London, due to its punk history, especially the early days.

You’re obviously into genre bending. How would you personally describe the Syd.31 sound?

Dr Magic – It’s a postmodern, apocalyptic mix of raw punk, tribal-metal with nasty drum ‘n bass, techno and industrial. We are everything the music industry should be, but are too scared to try.

Shavo – Its what would happen if Discharge got annoyed with a computer and chucked it out of the window.

You’re currently building towards the June release of a new album “Walk Amongst Rebels”. You’ve referred to it as your first biographical album. Can you dig into that a bit?

Dr Magic – In most of my earlier work, I focused on raging against the world, against system and was very post apocalyptic too. In making this new album, I went teetotal and could finally hear my inner voice. It started telling me what I needed to sing about, if you can call it singing. I was finally sober enough and mature enough to revisit a lot of experiences and events that I hadnt really thought about – divorces, break up, deaths, job losses and health challenges.

My favourite example is in the track Fighting for The Future. I channeled the time I talked someone I loved from jumping off a bridge. It all happened so quickly. On the count of 10, they were going to jump. Recording the vocals for it brought it all back and you can hear me start to breakdown in the second verse. I surprised myself how much pain and anger I had inside of me over that.

I’m a man of a certain age now, and I think its crucial we talk about stuff we have been through, such as all the times we were scared or cried alone. Its important that young men get to know that its ok to be scared, because men dont tend to talk much about this and its killing us. Suicide is now the biggest killer of young men and it has to stop – we have to talk.

Kara – It’s about life experiences most of us have been through, it’s pretty close to me on a personal level due to certain events over the last few years.

In support, you launched the lead single with the amazing title “Bulldoze Everything”. Can you tell us about that track and the response it has been getting?

Dr Magic – Maaaan, the response has been brilliant. Huge amount of love for it, but also a lot of hate too from people who dont think I should be making such music, but fuck those people. When we play it live, its incredible. People dance to our set, but when this track kicks in they stop dead, jaws hit the floor and they stand there fucking stunned. I think I’ve created the heaviest, filthiest riff ever and Im so fucking proud.

Its based on dealing with shitty people and those that seemed untouchable. I just wanted to drive a fucking bulldozer through everything and every system that keeps us down. I think I nailed that feeling in the song quite well, hehe.

Kara – To me it’s about bulldozing through people’s delusional and rubbish points of view. When we released it, at first there was a wall of silence as it was the first thing you heard or saw of us after a year long break, it scared people.

I saw the “Walk Amongst Rebels” cover art and have to say it looks awesome! What made it the right fit for the record?

Dr Magic – Aint it just amazing? Its done by my mate Sam Hayles from Dose productions. After my previous album, I knew I had to up my game further, which was gonna be damned hard. I tracked down Sam as he did artwork for some of my favourite artists such as Pitchshifter, Celldweller and Skindred. So we got chatting, I asked him to come up with some art for me based on the tracks I sent him. He came back with that image and booom! Its a corker. He utterly captures the feel of this album. 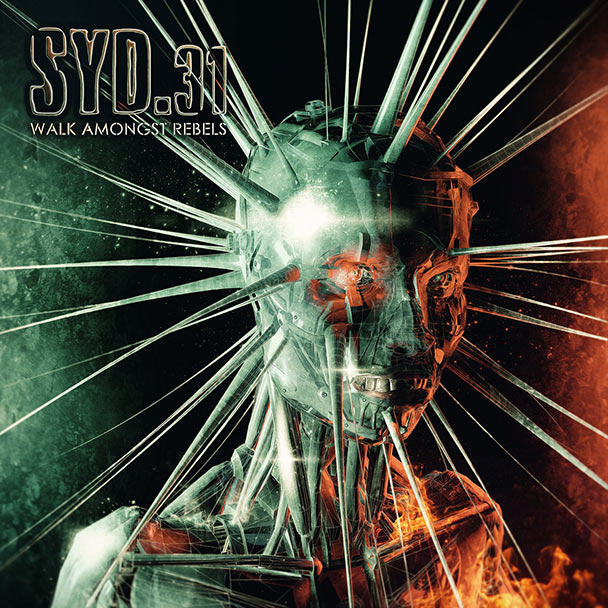 Speaking of the presentation, you have a unique visual element as a band which looks part blood-soaked, part warpaint, and very punk all at once. How did this come about?

Kara – We wanted to give people and photographers something to look and take pics of, it’s all part of a show so make it interesting!

Dr Magic – Its very natural to me now, but I initially used to gig in Syd.31 in just jeans, a t-shirt and no dirt. But I started fucking about with the make-up box, and the messier I looked the more people loved it. Its kinda lucky too as my favorite band is The Misfits, and my fav film is Mad Max 2, so hell year I was gonna be everything I loved from those. But it also carries a serious message, our planet is dying, we could be the Last Punks On Earth. We need to fight back and look like the very thing that would keep the murderous elites awake at night – we need them to panic when they think about us, they same way they used to panic about hippies, punks, rastas etc.

Do you have any favorite Syd.31 live experiences?

Dr Magic – Ha, soooo many its difficult to list them all. The common theme from each gig is the intensity of people’s reactions. We are still a very small band, but punters go apeshit. I love the way people almost fight each other to share my mic and get on stage too. I remember one person screamed so much during our set she just ended up foaming at the mouth like she had rabies. It scared the fuck out of me. I guess, because no one sounds like us, its a new exciting experience for people and the reactions have been unique.

Kara Wolf – Most of them so far, having people come up and chat to you about your performance is mint! They get so excited. People mostly like telling me my drumming is awesome just because of how wild I look.

Shavo – That gig when the tracks stopped working, haha. It didnt feel like a mistake. We dont use a fancy rig or anything like most electro bands. … it feels organic, so when things fuck up, people see that its all very real and very punk and like it even more.

If you could collaborate with any artist, dead or alive, who would you choose?

Dr Magic – Max Calavera from Soulfly etc or Burton Bell from Fear Factory – British Drum ‘n Bass and techno-industrial (me) meets gods of metal! It would be perfect. CALL ME GUYS!! CALL ME!!

Kara – Heilung and they are very primal. They are my kind of people.

Shavo – Ho99o9! I wanna see them live again, they are just amazing and Scarlxrd. I wanna work with them.

Dr Magic – damned good choices there. Ho99o9 ‘Street Power’ was a huge influence on our Bulldoze Everything video too. I’d fucking love to work with scalxrd as his look and sound would be perfect for us. Its very now.

On a similar note, your music is a bit outside our usual scope here at The Circle Pit. For that reason, I want to ask you the rather generic question – what are your top influences?

Dr Magic – Its nice to be appreciated by people that would not normally have us on their radar, huge thank you.

I have an odd musical background and my influences range from Italo Disco to African Tribal from when I grew up in Zimbabwe. But within that there is the Roots era Sepultura, Rammstein, and obviously Fear Factory. In addition there is Joy Division and their perfect blend of gloom and punk. And of course, I’d be nothing without The Misfits, Discharge and The Exploited – punk at its finest.

Shavo – Motorhead was the first band I ever listened too. hat and bands like Poisoned Idea and System Of The Down were a massive influence growing up. Then it all went downhill when I started going to local punk shows….

You’re from Manchester. Are there any bands coming up from the UK you would recommend to the listeners out there?

Shavo – I’d like to add Snake Rattlers! Saw them last night and probably why I’m so hungover. Oh, and the Blue Carpet Band. They are like a punk ‘n roll band and are are proper good.

Is there a story behind the name Syd.31?

Yeah! My dad had me quite late in life. He was born in 1931. His name was ‘Sidney’. When he passed away, it just felt right to name the project Syd.31 in his honor.

That’s all we have for today! Any finals words for the fans?

Dr Magic – Yeah – life is gonna throw a lot of shit at you and its ok to be scared and its ok to ask for help. Its also ok to just be you.

Kara – Come along and see us play, I promise I won’t eat you….maybe…

Dr Magic – Dont listen to her, its a trap. She will devour you!

Shavo – Remember, everything in moderation, especially moderation! Fuck my hangover….