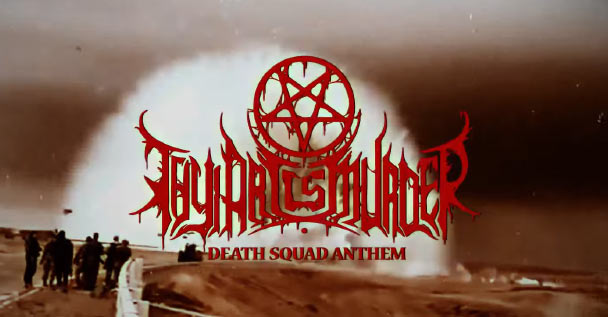 An all new Thy Art Is Murder single “Death Squad Anthem” has been released! Here’s the official video along with the press release in support:

Thy Art Is Murder have delivered another master lesson in brutality via their new single/video “Death Squad Anthem”. A champion for the youth who are fed up with the current political system, “Death Squad Anthem” is the second cut lifted from their earth-scorching fifth record, Human Target, set for release on July 26 via Nuclear Blast (ROW) and Human Warfare (AU/NZ).

“Death Squad Anthem” is a blazing examination of the current state of politics riddled with hyperactive virtue signalling, extremism and disenfranchisement. The despondency of “Death Squad Anthem” is brought to life with stark socio-political traumatic scenes of warfare, genocide, police states, brutality famine and riots interspersed with those at the helm of the atrocities.

Human Target was produced, engineered, mixed and mastered by Will Putney at Graphic Nature Audio in Belleville, NJ. The artwork was once again painted by Eliran Kantor (HATEBREED, TESTAMENT, ICED EARTH, SODOM).

Right before Thy Art Is Murder release Human Target, the band will tear down the east coast of Australia for a quick run of sold out headline shows before heading back to Europe. Joining them on the SOLD OUT ‘Life In The Crosshairs Tour’ will be Justice For The Damned, Dealer and Wither.