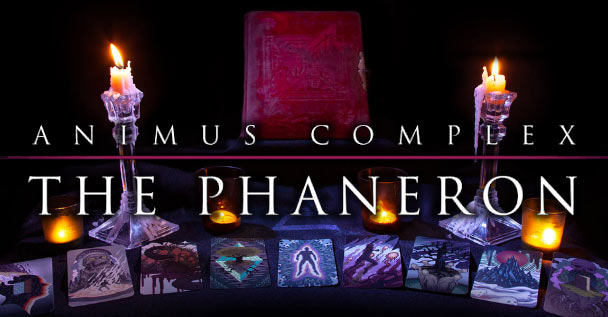 Animus Complex have been hard at work for nearly a decade now. In that time, they’ve made some impactful music of the Progressive Metal variety. This began rolling out with a strong 2013 self-titled debut on the band’s first full-length effort. This was soon followed up in late 2015 by their sophomore full-length “Immersion”. Both previous records effectively proved the band’s technical chops and cohesive nature as a musical unit.

Now, it’s onto to the next step… Most recently, Animus Complex constructed their third full-length offering by the name of “The Phaneron” and gave it to the world just this month. It’s an 11-track venture spanning almost 40 minutes worth of new content that I can easily see several of you enjoying.

Speaking of which, you can sink your fangs into “The Phaneron” through the streams provided across this page. Furthermore, Animus Complex have the full record available for streaming and purchase through platforms like Bandcamp. Give it a spin!

Now, let’s get into some of the specifics for the latest offering from Animus Complex. To begin, a definition to back the album’s title:

“The phaneron (Greek φανερός phaneros “visible, showable”) is essentially the real world filtered by our sensory input (sight, hearing, touch, etc.). The term is used not as a filter, but as the mental construct of the world as it is believed to be by an individual, apart from actual reality.”

As such, this does appear to be a conceptual effort marking a man’s journey for both understanding and a foothold in the world. The band themselves have described this with the following statement – The Phaneron is a quest – a yearning for change, purpose and direction through a series of psychedelic / spiritual encounters.

Upon first listening to this new Animus Complex album, I could tell something was different. This ultimately prompted me to go back and listen to their previous material because it had been some years. I wouldn’t necessarily say their previous output was lighter, but the latest release does strike me as a more dissonant and dirty approach from the band which leads to some interesting results. It also seems to have a much darker, more “metal” presentation from the foreboding atmosphere acting as a catalyst around the track list to the artwork presenting the album itself (illustrated by Travis Gillan and arranged for the front cover by Animus Complex vocalist Matt Turkington). There also seems to be less of a “djent” tonality present on this one.

The album itself opens with the distant ringing of atmospherics before a voiceover sample echoes above. This is soon replaced by some tight guitar strumming and the inevitable stomp of the full band coming into play. They go on to show multiple sides of their musical approach from the rolling thunder of metallic heaviness to lightning strike of their melodic side which might just leave hairs standing on end. All in all, choosing “Animals” as the lead single was an apt choice in that it both shows the band’s most recent direction in that capacity as well as the capacity for being a solid album opener to give the listener an idea of what to expect while forging into the journey of “The Phaneron”.

Some of my favorite cuts would have to be the aforementioned “Animals”, “Misery” with its high flying chorus which often got stuck in my head between the heavy beatings the song otherwise delivers, “Voice Within” has some very nice melodic weaving and well-crafted ideas at play, “Reckoning” immediately struck with the musicianship driving it and the chorus above, and I thought “Permanence of Death” made for a brilliant ending to the record both musically and conceptually. To be fair, there aren’t any glaring weak spots on the record so you should give them all a spin instead of picking and choosing based on anyone’s preference. It’s also clearly intended to be enjoyed from front to back given the concept, so it’s best give the entirety of “The Phaneron” a go if you wish to dabble!

The album flows very nicely from one track to the next. It all makes for an intriguing and fluid metallic journey through “The Phaneron”. While not every track is directly connected on either end, the atmosphere of the record does carry things forward in a nice and thematically coherent sort of way. The use of voiceovers across this album is also noteworthy for this reason. There are a few spoken word moments at the album’s beginning, end, and in between to further the concept and move things along. It all makes for a positive effect on the album in my opinion.

In terms of production, the album was recorded, mixed, and mastered completely in house by the band’s guitarist and backing vocalist Jeremy Davis at Metasonic Studios. I wouldn’t say it’s the cleanest sound I’ve heard in 2019 but I wouldn’t say it’s exactly trying to be either. Everything generally has its place in the mix, and it translates nicely with a punch in the end product.

When it comes to criticisms, I don’t have many. All in all, the band did a good job of working together to construct an experience for the listener and the effort shows. I would say some sections on some songs aren’t as exciting as others but in the end there’s a lot more going for Animus Complex on this record than not.

To be perfectly honest, I believe this band really deserves more widespread recognition in the Progressive Metal circuit. Beyond the hard work, they have a have a pretty awesome duality between smoother songwriting with great, sometimes jazz influenced melodies and heavier, steamrolling segments. There’s also an obvious chemistry between the members in creating such well balanced and tastefully heavy compositions. It’s been interesting witnessing their evolution over the past several years. Lots of potential for future greatness here too!

Speaking of which, let’s give credit where credit is due. The band is composed of four primary members. They are Jeremy Davis with the guitar work and a heaping helping of creative drive, Matt Turkington with multiple vocal duties from the high to the low end, Michael Ohlson holding down the groove from behind the kit, and the band’s latest addition Nick Gutenson on bass. Altogether, they effectively work to put some great southwestern Progressive Metal on the map from Phoenix, Arizona.

In turning the last page of this latest Animus Complex installment, the time has come to reach a conclusion on the band’s effort. When all is said and done, I think it’s safe to dub “The Phaneron” as a great modern metal record for all the reasons provided above and probably more. The band set out with the intention of crafting a well flowing and connected musical experience for listeners and they succeeded in doing just that. They also effectively took an evolutionary step to show listeners another side of the band. I’m feeling a strong 8 out of 10 on this one. Well done all around.

Once again, you can give “The Phaneron” a listen through the streaming links provided on this page. Simply scroll up and hit those play buttons! To bring this record into your collection, head over to Bandcamp and make it happen.

If you want to see what the band is up to next, they have a social media presence on platforms like Facebook and YouTube. Go give them a visit and show some love!