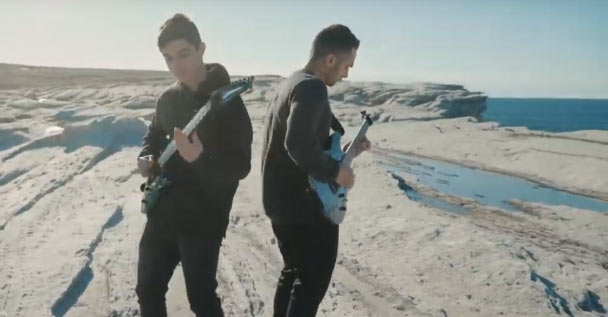 Myoora are proud to announce the release of their new single, Skyward – a bold instrumental track where climbing riffwork and lush production create a transcendent feeling of bliss.

Following the release of Myoora’s first EP Moon Grotto back in March, Skyward serves as the next big step for guitarist/composers Daniel Nesci and Daniel Pinto. Drawing inspiration from Plini, Aaron Marshal and Misha Mansoor, Myoora uses this single to show a side of themselves with a firm grasp on balancing elements – creating a sublime mix of technically proficient instrumentals and graceful, thought-provoking composition.

“A lot of our ideas from Skyward were progressions of initial ideas that were conceived around the time of writing Moon Grotto or even before,” says Pinto. “We just didn’t feel like we could use them at that point as our musicianship really wasn’t quite there to take it further.”

“I think it’s safe to say we’re moving away from the prog-metal and more into a melodic element of prog-rock/pop but still keeping true to our roots and writing style,” says Nesci. “We wanted to achieve an almost wall of sound full of emotion, moving and technical parts as well as overall better quality in every aspect from writing till the final production.

All the people we worked with including Jake Howsam Lowe, Randy Slaugh, Nathan Bulla, Simon Grove and even artwork by Alex Pryle, video filming by Harry Vincent and marketing by Kyle Karich – working with such dedicated people is always inspiring and we wanted to make something everyone could be proud with.”

Describing Moon Grotto as crucial to the learning curve, Myoora have taken positive critical reception for their last release and harnessed their interests to create something both enjoyable to perform and to listen to. With a second EP written and a new single scheduled to be released, no doubt the next 12 months will mean big things for Myoora and their ever-growing fanbase.