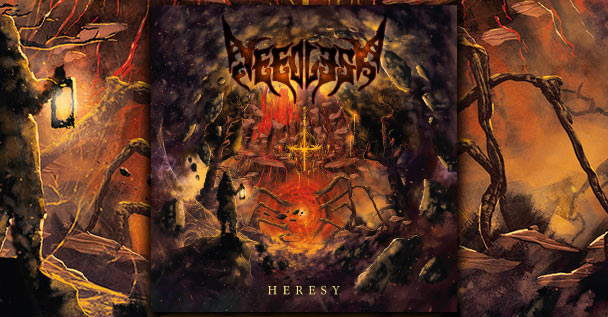 For 15 years now, Needless has been making quality metal music crossing the boundaries between Thrash Metal and Death Metal and into territories beyond. They’ve proven to be deadly talents in the arena of music and fair competition for just about any other band on the planet… With that, it’s safe to say Hungarian metal is alive and well!

Their latest full-length output “Heresy” effectively follows up their 2015 EP “The Dark Spirit of Ages”. The new record is composed of 8 tracks which cover nearly 40 minutes worth of metallic ground for ears to run on. It also effectively shows the sharpening of their approach to music and the next evolutionary step from their previous work.

If you wish to give the music a listen for yourself, streaming links and videos for “Heresy” can be found below. The band also has the new album available for purchase and streaming on platforms like Bandcamp, Spotify, Amazon, Google Play and more. The prices for purchase are actually very reasonable at all those locations so get on it!

Now, let’s get a closer read on just what makes this album an act of “Heresy”…

The record begins with the ringing of some very nice, melodic acoustic guitar playing. It’s essentially a calm before the coming storm… which comes soon enough in the form of a crashing tidal wave of instrumentation which grows increasingly more complex before launching into absolutely incredible riffing from the band’s instrumental corps. Everything about this intro track just feels incredibly METAL. Let it be known that this is a feeling that persists throughout the entire album. “Babel’s Fall” makes for an incredibly effective introduction in that it shows listeners all of the band’s key elements while simultaneously giving them a great stomp to the chest. I can honestly say this is one of my favorite openings to a metal album in all of 2019 so far.

“Babel’s Fall” leads onto a collection of great metal cuts and continued strength from the band. The next two immediate tracks “The Monolith” and “Starcult” were used as album singles and I’ve listened to both some ridiculous amount of times leading up to release of “Heresy”… and with good reason! They’re incredible slabs of metal music just waiting to be devoured. This persists through the entirety of the album. I don’t think there’s a single weak link present amongst the track listing. From “Babel’s Fall” to the album’s longest and final cut “Sky Burial”, it’s safe to expect nothing but a superb and highly talented display of high-octane metal music. In short, this is the good stuff \m/

The record flows very well from front to back. Furthermore, it’s clear that these tracks belong together as a singular unit. The band has laid out a definite sound that remains largely consistent through the albums duration with the exception of some acoustic and atmospheric palette cleansers here and there. However, even those have consistency to them.

The musicianship across this LP is extremely precise and technical. It’s also delivered with such a force and drive that it’s hard to suppress a “stank face” and a pair of horns at times (those riffs, man!). Every track brings about a high note density onslaught for the ears. Expect literally constant great musicianship from these guys! To merely say this album is “metal” might actually be an understatement. It brings together so many elements of the genre that we’ve come to know and love and delivers them at such a high level as to be undeniable.

Vocally, it’s all harsh but well delivered. Several different inflections can be found rolling off the vocal cords here which only add to the intrigue of the experience. I especially enjoyed the pitched growls as displayed on tracks like “The Monolith”. These are not your run of the mill extreme metal vocals.

Conceptually, the album launches through themes on a philosophical level. The tracks roll through ideas attached to differing myths, religious ideologies, and outlooks on human nature within the world. The lyrics can all be found over on Bandcamp if you’d like to dig in further on this point.

The band itself is made up of five members. Bárány Tamás and Botond Fogl diligently handle guitar duties with Bánfalvi László bringing up the low end on bass. Németh Zoltán delivers a stellar drumming performance and Forczek Ádám brings wide ranging harsh vocals on top. Altogether, they make one hell of a metal music machine worthy of admiration!

In terms of production for “Heresy”, this is a crisp one! Every instrument manages to shine through and make an impact while the vocals are laid in nicely. Every song effectively gets across to the listener through just about any listening medium. That being said, kudos to Hungary’s own No Silence Studios who have been credited with the album’s recording. From the outside looking in, it appears to be a beautiful studio both in terms of resources and aesthetics.

I don’t have any real criticisms to lend to this record. At worst, I would say not all the ideas on “Heresy” are 100% original, but they’re all taken from great sources and mashed together admirably. Other than that, if you don’t enjoy consistency throughout your metal albums, this may not be for you. In reality, this is a solid product and a professional effort from Needless through and through from the beautiful album art (provided by Cursed Hand Art) to the last seconds of “Sky Burial”.

Just as a total side note, I found the driving force of this album to be great for productivity. It’s been some of my go-to music for getting work done, exercise, and driving. Nothing to keep ones mind moving like the prodding of amazing, quickly paced riffs and instrumentation!

Now, the time has come to reach a conclusion on “Heresy”. Needless to say, this is a great album (couldn’t resist that one). If this record serves as an act of “Heresy” against anything, it certainly isn’t against metal music itself. This record will easily find itself among my end of the year “best albums” list in some form or fashion. In short, if you’re looking for a great metal kick to the chest, this album is it! I’m feeling a strong 9 out of 10 on this one! Very, very well done \m/

Just as a reminder, the album can currently be enjoyed from front to back through the streaming links listed out across this page. You can also find it at a reasonable price point or uncover other streaming opportunities over on Bandcamp, Spotify, Amazon, Google Play and just about all major online music platforms.

You can also dig in further to find the band on social networks. They have a base set up on both Facebook and Instagram where they’re considerably active. Go and give them a well-deserved follow!