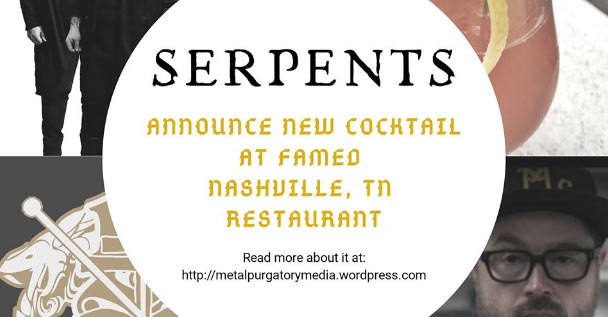 Here’s the official press release in regards to the most metal of drink creations:

Serpents front man and former Oceano guitarist, Andrew Mikhail, sits down with Husk Nashville Bar Manager, Adam Morgan, to talk about the new summer cocktail inspired by the band and their music.

Andrew: First off, thank you so much for finding inspiration in our music to create this signature drink. What inspired you to make this particular concoction, in Serpents’ name?

Adam: Given the original name of the drink it is based off of, I thought it was a subtle play on words. Most of the time when I’m doing R&D, I’m blasting music and [The new Serpents Album] “Temet Nosce” was on when the idea struck. The cocktail itself, is delivered in a tight crisp package. But the boozy punch sneaks up on you…like a snake waiting to strike.

Andrew: Can you describe the drink and its ingredients?

Adam: The drink is a deviation of a Husk staple called, “The Copperhead”. Its ingredients would be Bottled In Bond Rye, lemon juice, Garden Herb Cordials (a blend of herbs from the garden grown on the restaurant property and steeped in a rich syrup with a touch of whiskey), Punt e Mes Vermouth, and Peychaud’s Bitters. It’s then shaken and served in a chilled glass with no ice, and spritzed with absinthe (Andrew’s favorite, haha).

Andrew: How long will the cocktail be available?

Adam: The cocktail menu is ever-changing, much like the food portion of the menu. However, I imagine this cocktail will be around for a few weeks, to match with the heavy southern summer heat.

Thoughts From Andrew: As a huge fan of Sean Brock and the Husk restaurant family, it is an immense and absolute honor for Serpents to be an influence of anything coming out of that establishment; whether food or drink. Finding out that Bar Manager, Adam Morgan, has secretly instilled his love for metal via their famous cocktail menus only increases my love for Husk, and also gives me hope for our community as a whole. As we all know, the metal community is generally deemed as “taboo”; and it is unfortunately forced to “operate” in shadows. The “shadows” being: online forums, dishwashing pits of your favorite local pizzerias, college radio stations, and everything else of the like. We are never in the spotlight of the mainstream populous, unless something horrible is being done in the name of our type of music. It is a downright shame, as there is so much GOOD that can come from metal; as I am living, breathing proof today that it can even save lives. This drink, however, is an instance where the art can transcend the politics and norms; and truly give purpose to what we are doing as artists…influencing others to create and better their lives for themselves and for their community.”