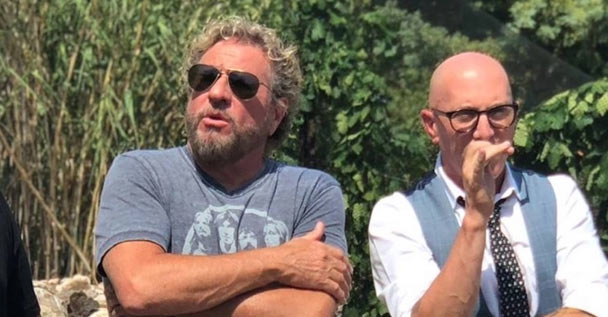 UPDATE – A new clip from the show featuring Maynard has emerged. Watch for yourself right here:

If you’re looking for something potentially entertaining to watch this Summer, Sammy Hagar’s ‘Rock & Roll Road Trip’ will have some interesting guests on board.

The July 7th episode will feature no less than Tool, A Perfect Circle, Puscifer, etc. vocalist Maynard James Keenan. They’ll also be joined by Guy Fieri on an episode to be known as “Tool’n Around In Flavortown”.

This will air on AXS TV on the given date…

Rock 'N' Roll Road Trip on AXS is back for its fourth season! Strap in and head along for the ride with Sammy as he visits a star-studded guest list including Country legend Willie Nelson; Rick Springfield in a special episode shot on location at his home; multi-platinum rockers REO Speedwagon; celebrity chef/TV Host Guy Fieri; renowned comedy duo Cheech and Chong; Country Music Hall of Famer The Charlie Daniels Band; stock car superstar—and seven-time NASCAR champion— Jimmie Johnson; groundbreaking Doors guitarist Robby Krieger; Blues Rock revolutionary Joe Bonamassa; and a special drummers episode with prolific percussionists Kenny Aronoff, Sheila E. and Jason Bonham, who gives an exclusive insider’s look at the making of his new Circle album.“I am so proud to be able to host this wild and crazy show for a fourth season. This is pure fun for me, getting to go around just hanging out and playing music with some of my favorite people in the world. It’s humbling to see that our viewers dig it as much as I do. I’m excited to keep this party going!”– Sammy