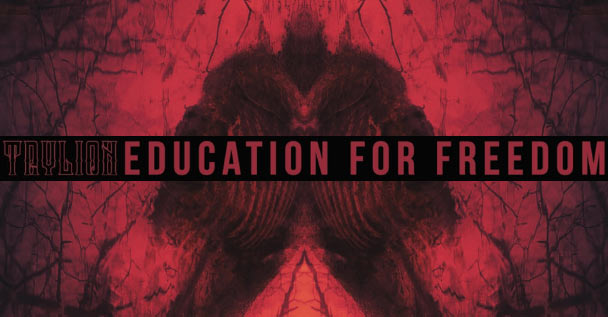 This band has held great promise for some time… and their time has finally come! Founded back in 2013 in the Polish city of Poznań, Trylion have been crafting a sharp approach to large scale Progressive Metal with elements of Math Metal akin to mad scientists in a lab. Now, the full fruits of their labor have been sewn across the world!

Presenting the release of “Education For Freedom”! This is the band’s first full-length album to follow up a few singles and the debut 2014 EP quite literally known as “EP nr 1”. This new album first saw the light of day on the tail end of last month. Through its 8 tracks, this record provides a ~45 minute experience for ears to wander across. Through this run-time, the senses will be assaulted and assuaged in a number of ways that I’m sure many of you will enjoy.

If you wish to directly take a class in the “Education For Freedom”, you may do so by checking any of the streaming links provided across this page! The band has also made their music available on major music platforms like Bandcamp, Amazon, Spotify, and Tidal. It’s surprisingly affordable on these platforms sitting around $6-7 USD. So, if you enjoy the music, get to it!

Now, the question stands… what are the exact results of Trylion’s experimentation on “Education For Freedom”? Let’s do some studying and find out!

First and foremost, it has to be said that Trylion deliver a massive sound from head to toe on this project. Every track features an impressive sense of scale like a tsunami of sound to sweep the listeners away. That’s not to say “Education For Freedom” is an onslaught of total, nonstop heaviness. Trylion know when to be more reserved as they submerge under the waves of dissonant, ethereal, and sometimes melodic songwriting. However, this merely works to further the imposing atmosphere draped around the broad shoulders of this project.

The album begins in a very Meshuggah-esque manner with a dissonant, warping soundscape followed by the impact of the instrumentation and monotone growls above. “Freedom” rolls like metallic binaural beats across the brain before exploding through differing layers of intensity. All in all, while not my favorite number here, “Freedom” functions as an opening track generally should on a metal album – it gives the listener a solid impression of what to expect around the corner without revealing all of the album’s cards.

I’d say every track put forward on “Education For Freedom” has its own merits and they’re all worth a spin. Some of my favorites would have to be “Stain” because it effectively got me into this band to begin with, the other single “Poliphrenos” with its extreme metal elements towards the end and a solid guitar solo, “Point of View” has moments of my favorite drumming on the record, “In the Name of the Father” with some of my favorite guitar work on the LP, and “Black Clay” is just an awesome closer all around from its initial build to any and all catharsis throughout the track’s explosion. It closes out the record in an eerie manner that sounds like a cross between breathing and creaking. However, I digress… Like I said, there really aren’t any weak links here when all is considered so it’s worth giving “Education For Freedom” a spin from front to back.

In reality, some of these tracks have been under development since the band first started. In fact, almost all the band’s prior content, apart from the track “Trust”, have found their way into this album cycle – that’s half of this entire record. “Stain” and “Point of View” have been around since 2014 (possibly earlier) and “Poliphrenos” and “Indigo” have been around since 2016 (once again, possibly earlier). However, the “Education For Freedom” versions of these tracks obviously have key differences from the re-recording itself to the actual time in development. This makes it interesting to go back and listen to the past recordings for some cross comparison.

There’s clearly a lot of talent to go around in this band’s line-up. They’ve maintained their instrumental corps for some years now with (presumably brothers) Bartosz Stachowiak handling the guitar and Paweł Stachowiak playing the bass from the very beginning. Bartosz Kilian later joined the band around 2016 on the drums but has since grown to handle vocals and even an occasional guitar solo as well (ex. “Poliphrenos”). Together, these 3 are dangerous!

Instrumentally, the composition on this record is solid from top to bottom. To be frank, I’ve been impressed with this band’s abilities from the moment I heard them on this album’s lead single “Stain”. In some ways, it would be fair to compare and contrast them with forward thinkers like Meshuggah (as I already have) and Uneven Structure. Trylion, more or less, land somewhere on the spectrum between those two while simultaneously conjuring up elements of their own. It’s worth noting that all the musicians have experience in entirely different styles of music in other bands as well. Some of this can shine through at times to make things even more interesting.

That’s not to say it’s all sunshine though. Unfortunately, considering how tight the band can be, some sections of this album don’t come across quite as sharp as others. I suppose that’s just a generalized pitfall for this style of music as some grooves don’t land as well as others. I first noticed this on the opening track at the transition around 3:27 and at a few other points through the record.

The vocals primarily come across in growls with consistently solid delivery. They’re spoken with the might of a callous god at times – both lyrically and sonically (ex. “Point of View”). However, clean vocals can be hit or miss. I’d say they’re all sung very well – no problem from the actual vocalist. However, at times, the production or lack of harmonies can make them feel sonically dry or flat. The first two tracks serve as a good example – the single “Stain” sounds great when it comes to the harmonized cleans, vocal filters, and just general delivery while the clean vocals on “Freedom” feels lacking, too plain, and dry in some ways.

The record was made in conjunction with Daniel Witczak at Aurora Audio in Luboń, Poland http://aurorastudio.pl/ who handled the final mix and master along with vocal and drum engineering. For the most part, the record sounds pretty sharp but there are muddy moments here and there caused for any number of reasons – this may be in part to the homegrown guitar recordings. However, everything generally has its place in the greater mix.

Speaking of which, it’s abundantly clear that all of these tracks belong together. Despite any differences, there are no real outliers or oddities among them. At worst, the electronic section on “Poliphrenos” threw me off but that it didn’t ultimately matter because it’s otherwise a solid track that fits right at home on this tracklisting.

Now that we’ve graduated from our “Education For Freedom”, let’s wrap up this review…

Point blank. This is a solid album. If you enjoy large scale Meshuggah-esque bands who aren’t afraid to bend the Progressive Metal / Math Metal sound in otherworldly directions, you’ll most likely enjoy what Trylion have to offer. That being the case, I have no qualms with giving “Education For Freedom” a well-deserved 8 out of 10. Great effort from Trylion!

Just to reiterate, the new album is currently available for streaming and purchase on platforms like Bandcamp, Amazon, Spotify, and Tidal. If you want to keep up to date with Trylion and their progress, they’ve established a presence over on Facebook. Give them a follow! Any and all support for their music is well deserved.