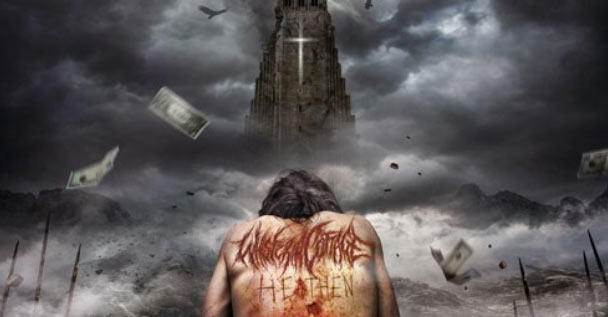 If you followed the Deathcore scene about 10 years ago, it’s likely that the name Whisteria Cottage came across your radar. They had come out with a heavy hitting record “Heathen” in 2009 which certainly made the rounds.

Now, 10 years later, the band is releasing a new version of the album remixed/remastered by none other than Zack Ohren! Pre-orders for this are currently available over on Bandcamp.

Today, we’re unveiling a track from that re-release “Devour Thy Throne” along with the all new album artwork! You can take this all in through the video stream provided right here:

Here’s the official word that came from the good people at Rebel Pyro in regards to this release:

“Rebel Pyro Musick is extremely stoked to be releasing the 10 Year anniversary remaster of Whisteria Cottage’s iconic debut album, Heathen, under our banner. We’ve been working closely with Mike [Comegys] on this entire process, since it came to mind over a year ago. Having a friendship that extends back through the last decade, or basically since the original release of Heathen way back in 2009, it was an honor to have Mike’s trust in making this entire thing a reality. We managed to secure the rights back to all the music from Alex Pavlov, the owner of WC’s original label Statik Factory, then got the master files from Jamie King. Once the rights were secured, it was off to the races getting the original album back online and on all platforms while discussing all things 10 year anniversary.

We could have just had Jamie handle everything, but being that this was a rebirth of sorts for the album, we wanted to have someone breathe new life into it, hence why we went with Zack Ohren. He’s very well known for his stellar production, especially in regard to the original Deathcore explosion in the late 00’s wherein he was one of the biggest go-to producers in the game. We knew we were putting it in very capable hands and Zack absolutely crushed it and blew away any expectations we might have had. This is definitely how Heathen was meant to sound and again, we couldn’t be more stoked to be the ones releasing it!”