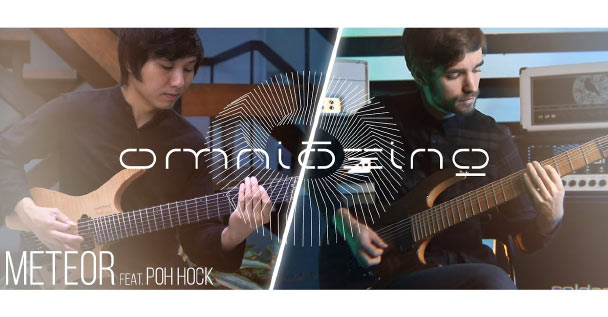 Minsk, Belarus appears to be harboring a secret weapon in the world of Progressive Metal – and the secret’s soon to be out! The Omnibeing is a special instrumental project for a number of reasons. Not only is Vitaly Shemetovets, the main artist behind the project, extremely talented with his craft from his guitar work to the beyond, he brings on a number of other extremely artists to make something truly unique. Chief among these features is Last Chance To Reason drummer Evan Sammons who appears across the entire new record in terms of both drum engineering and recording.

Speaking of the new record, it has just been announced that the debut Omnibeing album by the name of “Polytheria” will be released this very month! More specifically, it’s set to strike the world on August 27th with pre-orders currently available to those who CLICK HERE.

With this announcement, plenty of exciting information has come out of the woodworks. This includes a full list of guest features to be included on “Polytheria”. The list consists of Poh Hock (Native Construct), Wes Thrailkill (Mammoth), Cameron Allen, Dan James Griffin, and Vladimir Krupnov.

This is, no doubt, an impressive number in the field of Progressive Metal music with no shortage of talent to go around! It’s exciting to consider there’s more of this one the way. While speaking on the album concept, Vitaly had the following to say of “Polytheria”:

“The debut album Polytheria is inspired by retro-futuristic aesthetics and the sci-fi legacy of the 80’s. The main theme is built upon Stanislaw Lem’s novel Solaris: a living planet where peoples’ thoughts and memories are manifested into a reality. The idea of chaos organizing itself into order is exactly how the album was made: from a mess of diverse musical ideas into a firm and crystallized sonic construct, symbolizing the power of mental manifestation in a form of music”

Furthermore, while speaking on all the album features, Vitaly had the following to say:

“I always liked the idea of international jazz/fusion projects where great players come together to create something unique. And I was excited to try this approach for Omnibeing. Please meet Wes Thrailkill, Poh Hock, Cameron Allen and Dan James Griffin. Each of them contributed a guitar solo, adding their own unique touch to this record. And of course Evan Sammons from Last Chance to Reason, who’s the guy behind the drums arrangement and recording on the album. Working with these people who have always been an inspiration to me was an honor, and felt humbling and rewarding at once.”

If your ears enjoy, you can jump on social networks to show support on platforms like Facebook, Instagram, and VK. And, once again, the new album will land August 27th with pre-orders now available to those who CLICK HERE.