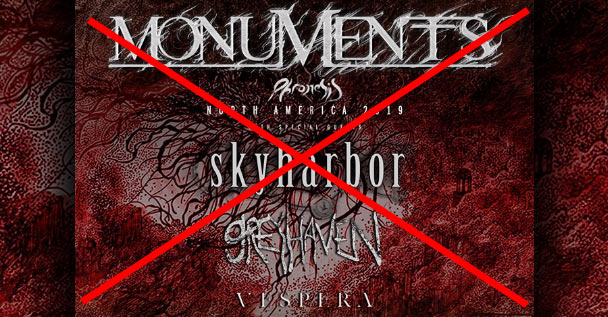 UPDATE – The tour has been postponed. Monuments had the following to say of this:

“Unfortunately, we come with bad news. We will be moving our North America tour to April 2020 due to complications with our US Visa’s.

All tickets bought will still be valid for the new dates.

We would of preferred to have said that this happened due to the US government, with other bands having difficulty recently but ultimately this is not the case.

On August 17th, our visa’s still hadn’t been applied for, as information was missing from our label. With an average wait time of 17 days for an embassy appointment in London, 10 days for visa approval and 7 days after the appointment to get passports back, we made the decision to move the tour rather than be any later than we already would have been.

In light of this news, we are no longer affiliated with Go Down Believing Management or Decibel touring.

Not only does this affect you all, by not being able to see us play for a further 8 months. Some of us took these 6 weeks off from work and gave away this work to other people, which most certainly isn’t ideal.

We apologise for this news, but we will be there, stronger than ever. The new dates will be announced very shortly.”

Original story – Monuments have announced a tour to sweep through North America in support of their latest album “Phronesis”! In doing so, they’ll be joined by no less than Skyharbor, Greyhaven, and Vespera for the trek. Music from all the bands and dates for the shows can be found across this page.

This will be the band’s first recent tour through North America without vocalist Chris Barretto. Andy Cizek (from the band Makari) has stood up in his place.