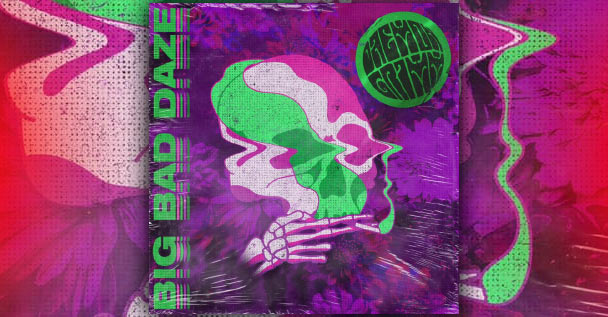 Two primary daemons have been released in the world this month. You had Mayhem’s new album “Daemon” and now we have Daemon Grimm stomping on our collective chests with a new EP… God bless and a Happy Halloween to you!

For the uninitiated, Daemon Grimm is a metal band crossing a whole host of styles from Deathcore to Groove Metal to Hardcore to Nu Metal and well beyond. Simply put, they’re not afraid to break outside of the box and swerve through a series of lanes while making their particular brand of heavy music. This all serves to leave listeners on edge (in a good way, of course). Hailing from the southern land of Louisiana, they’re a four-man band making their stand in New Orleans. They’ve been at work since 2016 and have released two records in that time.

The latest of these comes in the form of the “Big Bad Daze” EP which we’ll be digging into today! This record consists of 5 tracks spanning roughly 20 minutes of hard-hitting chaos. You can give a listen firsthand through the streams provided across this page. This includes slick videos for the title track and the lead single “Riverbed Deadener”. Daemon Grimm also have their music available for streaming and purchase on platforms like Spotify, Apple Music, and Amazon.

So… just how big and bad is this particular daze? Let us discuss…

Heavy would be a good word to describe this record. But to leave it there would be disingenuous. There’s a lot going for this band as they approach music from multiple angles capable of inducing stank face on the unsuspecting in one stride and hitting the feels with the next.

Dark would be another great candidate of a word to describe this record. Beyond the heaviness itself, the topics covered on this record are not for the faint of heart. They seem to cross between a mix of mental illness, toxic relationships, and substance abuse. That being said, Daemon Grimm have a lot to unpack through their words as well as their music here.

This is a record that is simultaneously a kick in the teeth and an accessible metal outing. An accessible kick in the teeth, if you will. For example, sometimes Daemon Grimm can come off like a Deathcore version of Korn – a Deathkorn band. At times, one can also draw parallels to the likes of The Acacia Strain, Lamb of God, Deftones and beyond. Usually, these illusions are short lived seeing as Daemon Grimm don’t stay in any one sonic location for too long. They pummel and experiment in ways that you’ll really have to hear for yourself.

The record opens in a distorted wash which launches into the single / title track “Big Bad Daze”. This cut immediately unveils the harder hitting side of the experience but also works to begin pulling back the curtains on some of their other elements which are more heavily explored later in the record. This makes for an effective vehicle to ease listeners into the experience, especially considering how the band has grown since their self-titled debut which was primarily a Deathcore effort. While the self-titled was enjoyable in itself, Daemon Grimm appear to be taking more risks on “Big Bad Daze” which comes with some payoff. It’s a natural evolution which is nice to see.

“Riverbed Deadener” was the other single for the EP and actually the first thing I ever heard from Daemon Grimm. It immediately caught my ear with the pure violence and vitriol of it all. In my mind, this is the heaviest track on the whole of “Big Bad Daze” and works well to further the introduction provided by the title track.

“Wax from the Hive” is where things start to get a bit more zany. It starts with an interesting, dissonant section which reminds me a bit of Strapping Young Lad. It then dips into more Hardcore elements and then really stands out from the pack with some clean singing halfway through before bringing up a breakdown punctuated on the lyrics, “We swarm like a storm”. To paraphrase Will Ferrell, “I don’t know what it means but it’s provocative! Really gets people going!” It goes on to end with a massive wall of sound akin to a choir of the damned singing over a fly infested carcass. If that doesn’t sound metal, I’m not sure what does…

In contrast to the opening numbers, “Reign Over Me” is probably the lightest track on “Big Bad Daze”. It seems to channel their inner Deftones while mixing in several elements of their own. It’s pretty damn catchy and isn’t afraid to throw some heavy jabs in the listener’s direction despite the somewhat toned-down approach.

There’s something strangely awesome and creative about the last track being called “Do Not Resuscitate”. It really puts a period on the end of the sentence as to insinuate the end of this record is an actual voluntary death. It begins with a bit of a drum n’ bass section which glitches into a large-scale sound literally hit home with the ringing of hammers on steel. This track takes some of the best elements from across the record and combines them with some elements not previously seen… It’s a solid end both musically and conceptually.

Despite any sonic difference between these tracks, every number brings a punch that’s clearly coming from the same source. Daemon Grimm have shown themselves to be capable of piecing together a cohesive project from the outset. Every track flows together nicely and they’re placed in such a manner as to compliment and drive the listening experience forward. In short, they seem to know what they’re doing.

Musically, every instrumentalist in this band brings a solid performance. Having played together for a few years now, they seem to have developed a respectably tight playing style with the ability to pivot at a moment’s notice. There’s clearly some talent here.

Vocally, this is an incredibly varied EP. There are strong harsh / growled vocals pushing the heavier segments, but several other paths are crossed as well. The clean vocals tread territory similar to the aforementioned Jonathan Davis from Korn and, strangely enough, can remind me of a lower register Brendan Urie from Panic At The Disco at times. But they go beyond that with some strong, driven clean vocals as well. Much as with the music itself, the vocals will keep listeners guessing at what will come next.

In terms of criticism, I don’t have too much to say. At worst, Daemon Grimm have a tendency to wear some influences on their sleeve. However, in my mind, they’re glued together so well that it is becoming a sound that Daemon Grimm can start to call their own. It should be interesting to see where they go with this moving forward. And just like that, the criticism section became a compliment section. Beyond that, “Big Bad Daze” is given to the bane of all enjoyable EPs in that it feels too short… Hope there’s more where this came from! Objectively, I don’t think “Big Bad Daze” will be everyone’s cup of tea… However, it does enough in enough different pastures as to catch attention from a pretty wide board.

When it comes to production, this record is sharp! Honestly, hats off to whoever handled this portion of “Big Bad Daze”. It manages to be grimy and clean simultaneously which really compliments the band’s modernized yet dirty approach. Kudos.

Now… for a final verdict. Daemon Grimm appear to be a potential filled beast of the band making their presence known. “Big Bad Daze” is one hell of a statement that sets the band apart from most metal units coming up today while also remaining familiar. I was highly entertained while listening to this record over the past month or so and, for that reason, I have no qualms giving it around an 8 out of 10. Great effort here!

In other news, it looks like Daemon Grimm have an upcoming record release show for “Big Bad Daze”! This will take place on November 7th at The Howlin’ Wolf in New Orleans. They’ll also be playing the two days immediately following with a November 8th appearance at The Warrior on the River in Tallahassee, FL and a November 9th performance at The Dead End in Walker, LA. Come out and support these shows if you’re able / looking for a good time!

Just to loop back, all of Daemon Grimm’s music is now available on the likes of Spotify, Apple Music, and Amazon.

If you enjoy the music, feel free to keep up with Daemon Grimm’s progress as they navigate the metal field. They currently have a social network presence on Facebook, Instagram, and Twitter… Sign up!