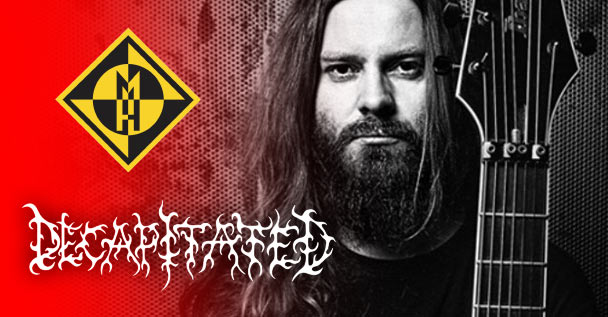 It would appear that Machine Head have officially added two new members to fill the voids left by Phil Demmel and Dave McClain. No less than Devilment & Eastern Front drummer Matt Alston and Decapitated guitarist Waclaw “Vogg” Kieltyka have been named to make this happen!

Vogg had the following to say of his addition to the band:

“It’s a huge honour to be able to play at the same stage with the mightly Machine Head. I grew up on their music and when I heard I will join them on this tour, I was literally stoked!

As a thirteen years old I was learning songs from ‘Burn My Eyes’ who is still one of my favorite albums EVER, that album had also a big influence on my playing and my guitar skills.

Machine Head is not just a band, it’s an institution who has still a big influence on how all metal scene looks like, so for me as a musician and also a metal fan it’s something special to be able to be a small part of it.

That will be definately a huge lesson and experience for me to be a part of such a professional team. Adventure begins, I cannot wait!

To all Decapitated fans: I will see with you also during Decapitated shows in 2020. We do plan also to compose new music for next album so keep an eye on more news!”

LATE NIGHT JAM SESSION IN THE HOTEL 🎸
Robb & Vogg jam together for the first time. No clicks, no tuner, just 2 dudes playing MH tunes on guitar.