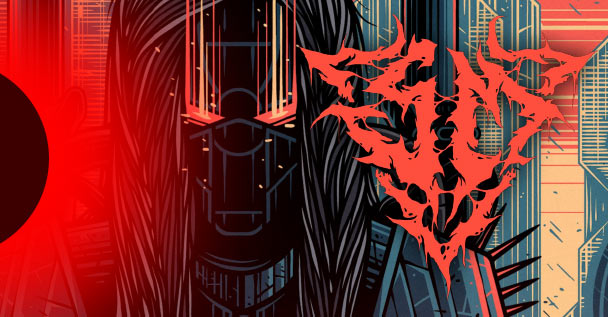 SLAM MASTER is a project from Russia bringing about Electronic Death Metal with deadly force. This is done around a Warhammer 40k theme among other inspirations. Today, we present the track “Umilganium Emperor” for your enjoyment:

Here’s the official word in support of this all:

This track is an experiment where death metal and electronic music mixed. All tracks from this project goes with the story based on Cyberpunk, Warhammer 40k and the story of Prussia which was on the lands where I was born. You can find the first chapter of my story about this world called Umilganium if you’ll open

Chapter 1: Umilganium emperor
I don’t know why I decided to write this chronicle, it might be because my world is in the beginning of the end. I believe this to be the expression of my hope that something will change and our era won’t end in complete devastation and genocide of the planet. My lovely and beautiful Umilganium, this world was once an existence of nothing but magnificence and honor long ago. Sadly, everything changed…and our civilization suffered for it. The globalization and the technologies that made our planet so rich, made us fat and greedy, so much so that we couldn’t just be thankful for what we had here. We started colonizing other planets, systems, and even discovered the existence of other life within our universe. At first, this was amazing, new, and revolutionary to discover other forms of life, but unfortunately, not all progress that was made technologically was done diplomatically.

But we can’t blame them because we were the same as them. We became them again, we understood that we can survive in this cold, aggressive, and sometimes disgusting universe. Sadly everything became the way it once was before. The same type of corporations that made our life better many ages ago started to make weapons again to make our armies the strongest in every solar system and not a single galaxy could stand in our way. Year after year, decade after decade, our small planet became the most powerful empire in the universe, spreading our influence to every galaxy we brought under our control. So massive we became, so huge did our control of the stars became that other systems within other galaxies joined in our war effort without resistance out of pure fear. We lost ourselves because of this campaign of never ending warfare. Most of us forgot what it means to have peace and forgot about the concepts of justice.

Thus, our democracy crumbled. We decided to choose only leaders who would lead us to victory. The most powerful and furious warriors became our emperors and their power was nearly omnipotent. No one could stand against these decisions without facing the obvious conclusion to voicing opposition to these now maniacal warlords. One lord received the title «Slam Master» because he didn’t even need to strike his enemies to defeat them. He could just slam them and no one could compare, so they gave up.

As I said years lead on to more years and decades became more decades and our emperor wasn’t immortal. We as a people can will ourselves to live longer, but nothing more. Our emperor was so busy with war and politics that he had no time to start a family. Thus, when he died, the throne was empty. All of the syndicates within our kingdom wanted to be at the head of the throne to become emperor and focus on industry as previous emperor syndicates have done. The Civil war had begun and it still has not reached it’s conclusion. The potential victory in this war means only one thing. You need to be ready to protect yourself from your enemies because behind every corner is a potential death sentence.