STEVIE T backed out of touring with DRAGONFORCE / explains why 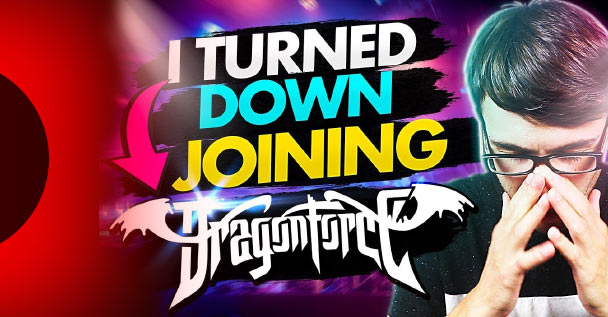 Not too long ago, it was announced that YouTube music comedian Stevie T would be touring with Dragonforce. Now, that is no longer the case…

Stevie T explained why in a video which can be seen just below.

If you don’t feel like watching, here’s what he had to say of the situation:

“As some of you may know, over the past few months, I’ve kind of built a relationship with Dragonforce, a little-known band. I was even their triangle player – it was on Wikipedia, so it’s real.

So just a little backstory what happened was: Herman Li was doing a live stream on Twitch and someone asked, ‘When is Stevie T joining DragonForce?’ And Herman Li jokingly said, ‘Okay, Stevie T can join DragonForce, if he plays the triangle.’ And of course, I took that as an opportunity to do a video.

Well, it turns out Dragon Force loved the video and they loved my content and they liked my guitar playing, so they asked me if I would join them in their US tour as their bass player because Fred was leaving the band. So I 100% agreed to it, I was actually pretty excited to do it… at first…

I wish I could sit here and tell you that I canceled the tour because I’m too busy with YouTube, which is true, but it’s not the whole truth. I even learned half the songs on bass.

But then, as we got closer and closer to the actual tour dates, all I can say is I started having what I can only describe as almost mental breakdowns, where it would get to the point where all I could think about was this tour and it was consuming my mind and my anxieties were just, like, going crazy.

I couldn’t even work on my videos anymore because I was just thinking about the tour constantly, and I knew that I was gonna have some kind of mental breakdown sometime before or during the tour and I didn’t want that to happen, so I had to call off the tour.

It’s not one of my proudest moments, allowing myself to succumb to my anxieties – again – and of course I felt like a huge asshole to DragonForce after completely agreeing to do this, like, ‘Oh, yeah! Dragonforce! I would love to tour with you!’ and then weeks later being, like, ‘Oh, sorry, oh, by the way, guys, I have crippling anxiety, so I’m not gonna be able to do it.’

This was 100% my decision. Dragonforce wanted me to be there so bad, and I apologized so much for anyone who bought a ticket to come out to see DragonForce with me. I can’t say sorry enough.

But that’s why I want to be honest with you guys because I know a lot of you guys have dealt with anxiety and depression as well. And a lot of you even say that my videos helped you overcome that, which just blows my mind, but just know that you watching me is helping me cope with my anxiety as well, so we’re one in the same, man, we’re in the same boat.

And if I can help one person by admitting that then that means everything to me. Because I think people watch my videos and see this guy who is just full of confidence and just ready to take on the world…

Honestly, when I’m in front of a camera is the only time when I feel like that, so that’s why playing a live show in front of all these people, being in a tour bus after I’ve never toured – I’ve never even toured before – my first tour ever is with a famous band on a headlining tour…

That freaked me the hell out. As for DragonForce, what did they do after I bailed on them? They gave me a cameo in their new music video.

I mean, at the end of the day, I’d rather be a YouTuber anyways, but still, this would have been quite the thing to put on a resume, like, playing with DragonForce. I half-expected DragonForce to hate me after bailing the on them like that; they rightfully could have been, but instead, they were, like, ‘Hey Stevie, we understand. We’ve dealt with our own anxieties before as well.’

In fact, Herman Li even talked to me on the phone for over an hour, talking about his anxieties in the past as well. Anyone who looks up to Herman Li as a guitar god and just hopes that he’s the amazing person that he appears to be, I’m here to let you guys know that he is.

He’s the most genuine dude you will ever know. I still picked up my deluxe package of their new album so, I mean, I’m still supporting the band, of course, and we’re all on great terms but DragonForce, you gotta come to the East Coast, man. We want you here, man.

So that’s why I’m not sugarcoating this whole DragonForce thing. This is what happened; hopefully someday I can overcome this. Well, ain’t I a ray of sunshine today.”