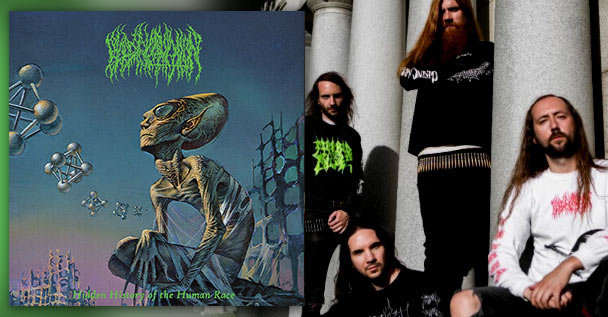 So far as I can remember, Blood Incantation have always been a fascinating band. They immediately left an impression with a unique presence that set them apart from the dime a dozen Death Metal acts. They know how to control tension with deadly skill and can build up atmospheres from the ether as their compositions weave in a multitude of directions.

My personal introduction came through listening to the “Interdimensional Extinction” EP on Bandcamp a couple years back. It was a solid introduction that I would highly recommend to those in a search for out-of-the-box Extreme Metal. Following this, Blood Incantation would go on to come out with their debut full-length “Starspawn” the following year. This was met with a considerable amount of critical acclaim… and for good reason! Unfortunately, I missed this album cycle initially but have come back around to enjoy it quite a bit. On top of these primary releases, Blood Incantation have launched 3 demos, a split with Spectral Voice, and a live album. So, it’s safe to say they’ve been busy over the years!

It’s all led up to this very moment… The release of their sophomore full-length “Hidden History of the Human Race”. This is a 35+ minute bombshell of a Death Metal record which stands aside and unafraid from much of the pack while keeping a foot planted in the things we love about the genre. If you wish to give a listen firsthand, streams can be found across this page. The music is also available for purchase and streaming via most major online music platforms. This includes Bandcamp, Spotify, Amazon, and Apple Music among others.

“Hidden History of the Human Race” is essentially broken down into 4 pieces. They are “Slave Species of the Gods”, “The Giza Power Plant”, “Inner Paths (To Outer Space)” and the lengthy “Awakening From the Dream of Existence to the Multidimensional Nature of Our Reality (Mirror of the Soul)” (which clocks in at 18-minutes). Each of these pieces approach the listener from a slightly different take while remaining paired with the greater whole of this LP.

This is a brain melting experience of a record. The tracks traverse varying levels of heaviness, psychedelia and experimentation to twist the listener’s perceptions in new and interesting ways. One can never be quite sure what to expect around the next corner. There’s no shortage of studio / analog tricks complimented by the different brand of thinking this band brings to the table. Through this, Blood Incantation prove once again to be high level threats in Death Metal landscape.

The single “Inner Paths (to Outer Space)” was a great indicator of what was to come musically. It did this without unveiling the full hand but made a solid introduction to “Hidden History of the Human Race” for those who were recently brought into the new album cycle. It also has arguably one of the trippiest music videos to be released this year. Watch the goods right here:

All four of these tracks exhibit skill, variety, and creativity in the instrumental department. It’s a very strong showing from this four-piece Colorado band – all of whom handle a given instrumental duty in Blood Incantation’s ranks.

Speaking of the members, they are co-founder Paul Riedl up front handling guitar and vocal duties. He’s matched with fellow guitarist Morris Kolontyrsky and bassist / newest member Jeff Barrnett. Backing them all up is co-founder Issac Faulk holding down the drums. All of them prove to be incredibly talented and all of them are also involved in other projects and bands worth checking out. If you enjoy Blood Incantation, look ’em up!

When it comes to the production behind this record, things are simultaneously gritty and clean through an entirely analog sound. It may not be the prettiest approach at times but it complements the bestial sound perfectly. This all works to give the album a certain OSDM feel which I can appreciate. This was done in conjunction with Pete Deboer at World Famous Studios.

It’s also worth noting that the beautiful album art is actually a vintage piece. It’s a product from the 1970s made by no less than Bruce Pennington who’s done artwork for juggernaut book series like Frank Herbert’s Dune, works by Robert Heinlein, Isaac Asimov, and more! In fact, you may have seen this album art pictured on other media over time.

I don’t have anything particularly negative to say about this record. It came together quite nicely and scratches a certain itch in my weathered ears. At worst, I’d say some parts are tighter than others. But given the approach, it’s impressive all the same. Objectively, not everyone will like this (or even come close to liking it) but such is the nature of Extreme Metal. However, for those who stray towards this music, you’re in for quite a treat with Blood Incantation’s work!

In conclusion, it’s fully worth learning the origin of the human race according to Blood Incantation. If you’re an Extreme Metal fan, you’ll probably want to give this one a spin. It looks to be a superb 9 out of 10 with two thumbs up for this one.

Once again, you can sample the wares for yourself! The music can be found across this page and can also be grabbed over on Bandcamp, Spotify, Amazon, and Apple Music among other locations. If you want to follow along with Blood Incantation and see their next moves as a band, they’ve established a base through Facebook. Go show them some love!