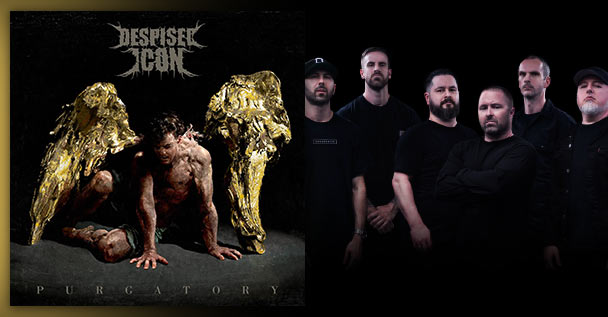 The pioneers of Deathcore have returned to their roots with yet another album under the belt. However, this is a record unlike all of their previous output. They put years into creating this record, making it the most time they’ve put into a single album to date. Enter the gates of “Purgatory”.

To be exact, this is the band’s sixth record and the follow up their 2016 comeback offering “Beast”. If someone wanted to say this was Despised Icon’s best album to date, I wouldn’t blame them. All the effort behind this LP shows. They’ve clearly pushed themselves to make a great full-length offering. They’ve simultaneously stayed true to and expanded upon their old school Deathcore roots, sewing the might of distorted destruction through the run time of “Purgatory”.

It all adds up to 35+ minutes’ worth of old school Deathcore glory with a couple surprise twists here and there as the band took additional time to experiment.

Quite unexpectedly, the album has a clean intro where all their previous efforts go immediately for the kill. It’s a beautifully done arrangement effectively showing another side to the band. Moments like this do re-emerge the record – for example, on the opening of “Moving On”.

However, this peaceful introduction doesn’t last very long… The blood begins to spill with the second track, which is the title track “Purgatory”! This one is packed with impressive levels of aggression – a trend that, not so surprisingly, persists throughout the majority of this record. It also effectively re-introduces Despised Icon’s chops as a band sitting on the high end of the given field.

The music on this record can be quite hectic in its delivery while still maintaining its coldly calculated approach. I’d say a number like “Light Speed” is a good illustration of this. There’s staggering attention to detail matched with the sheer blood thirst of it all.

Maybe I’m misinterpreting but there does seem to be a definite theme of “Purgatory” on this record from what I’ve picked up in the lyrics. There’s a lot of strife and negativity apparent that’s being reflected on through the album’s run time. There are also moments of motivation like “Legacy” and moments of anxiety like “Dead Weight”. There are even moments in French like “Vies D’Anges”. So, despite what seems to be centralized theme, there is some variety present.

Vocally, the performance is solid as always. From forceful vocals further on the Hardcore spectrum down to Deathcore growls and merciless bouts of pig squealing, this is Despised Icon through and through when it’s coming from the voice box.

The sound of “Purgatory” is huge. The band worked with Christian Donaldson (Cryptopsy, The Agonist, Beyond Creation) to make the presentation of this record crispy. Full marks on this end of the spectrum.

I don’t have much negative to say about the effort Despised Icon put forward with “Purgatory”. It can easily stand up to any of their previous work, if not surpass it. This is another worthy step to add to the path of Despised Icon’s legacy.

In the end, I think it’s safe to say that Despised Icon have continued to impress with their return efforts. This is a great album from head-to-toe. It doesn’t waste time. All 35+ minutes are directly to the point with impactful attention to detail. It’s short, sweet, and it manages to make its point. I’m feeling somewhere around an 8.5 to a 9 out of 10 on this one.

If you wish to give a listen to the album for yourself, you may do so through any of the streaming links provided across this page. You can also purchase the album and find more streaming options through platforms like Amazon, Spotify, Apple Music and beyond. You can also pick up some physical merch from the band at their Webstore.