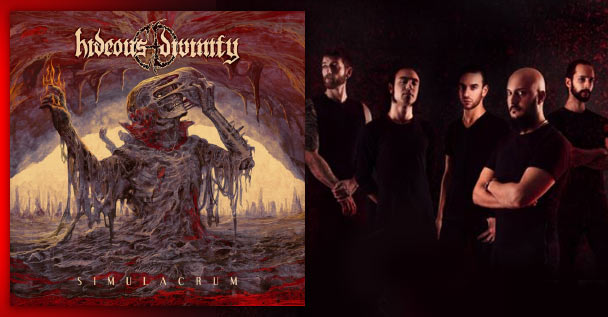 The cover art is appropriate. The new Hideous Divinity album is a face melter.

“Simulacrum” is the name of this new steamrolling juggernaut of a Death Metal record. HD, once again, prove to be incredibly technical from the outset, pummeling on the eardrum from any number of directions. Blast beats and riffs for days here… UNTIL… there’s a moment of calm that… launches into another ear smashing moment of metallic glory!

This band is incredibly sharp from the floor up. They have an innate sense of control over the chaos and can lash out with a moment of sheer brutality just to pull into back into something unexpected yet beautiful. It’s clear that after years of playing alongside each other, they’ve developed as a well oiled musical machine and an worthy force on the international stage of metal music itself.

The recent signing to Century Media was well placed. Congratulations to these guys on that.

The opportunity was not wasted. Every single track across this release is packed with clear effort and attention to detail. HD is and always has been a deadly calculated band.

Better yet, this is a natural progression from their previous material – especially as a direct step from 2017’s “Adveniens”. But these guys have been doing it for over a decade now!

Altogether, they’ve pulled another excellent album. There are certain riffs across this thing that just send my mind for a loop. “Anamorphia Atto III” was on repeat today, for example. If you had the opportunity to enjoy the excellent singles put forth from “Simulacrum”, you were really just scratching the surface of the trip that comes with this record. There are so many moments that are just waiting to twist your face into metallic joy. It’s consistently quality material.

Even in terms of production, the overall sound and mixing of this record is incredible. There’s a high level of professionalism showing through every element making it one of the highest quality Death Metal releases to come out in 2019. It sounds like meat falling off the bone.

While I would say that the music does largely fall within parameters for the genre, there are moments where Hideous Divinity do their best to push boundaries. At times, I would say they succeed quite well within certain tones or out of the box composition choices. Plenty of interesting moments to peel back across this album.

To sum it all up, if you consider yourself to be a fan of Death Metal / Technical Death Metal, definitely consider giving the new Hideous Divinity a spin. It’s among the best Extreme Metal records I’ve heard in 2019. High marks for this one.

The album is OUT NOW and you can purchase or stream the beast through most major online music platforms. This includes the likes of Spotify, Apple Music, and Amazon. You can also pick up physical merch over at the Century Media webstore.