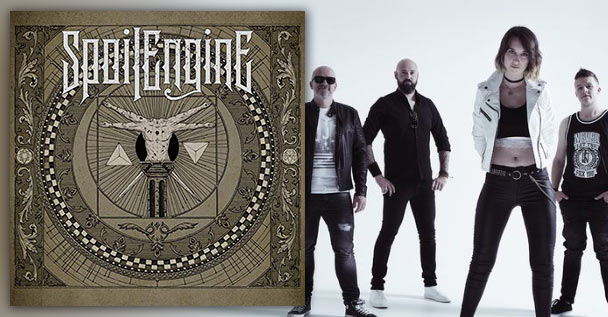 15 years after their inception, the Belgium / Holland based Spoil Engine are still going strong with a driving and persistent brand of modern metal music.

Most recently, they’ve released their fifth full-length studio album by the name of “Renaissance Noire”. This record comes strapped with 10 tracks spanning a 44-minute runtime. It was released through the good people at Arising Empire (a sub-label of Nuclear Blast with distribution from Warner Music).

If you’d like to give a listen to the goods for yourself, you can do so through the streaming links provided on this page. Spoil Engine’s music is also available for streaming and purchase on the likes of Spotify, Amazon, Apple Music, and so on.

This is a band combining elements of Melodic Death Metal, Groove Metal, and Metalcore in a modern metal sandbox. It also comes across with quite the bite musically and this is complimented by the varied approaches of their newer vocalist Iris Goessens up top.

She joined the band in 2015 and it’s worth noting a few other members / changes. Dave De Loco just joined the band as the bassist in 2017. Founding member Steven “Gaze” Sanders has been holding down guitars since ’04 and Matthijs Quarrs has been drumming for the band since 2011.

Altogether, they’ve delivered a hard hitting new effort with the band’s latest. From what I’ve heard, this actually sounds like some of Spoil Engine’s heaviest material to date. It doesn’t waste any time going for the throat with heaviness as the band weaves together riffs and rhythms. It’s largely an impactful record in this way.

There’s also room for melody present as Iris Goessens’ voice flips from harsh to clean to somewhere in-between with a pitched growl in a moment’s notice. The band follows suit to compliment her varied vocal chops for several of these change ups. All in all, they appear to be a cohesive musical unit on both sides of the coin – harsh and clean.

This is a very consistent record in some ways, but it does have some unexpected switch ups from track to track as the band works up and down with dynamic range and mood. So, it’s varied with some unifying factors which you’ll come across from the very start of “Renaissance Noire”. This largely lays in the guitar work, key elements of the vocal style, and the overall aggression behind the band’s sound.

In fact, if one had to choose a single word to describe the new Spoil Engine LP, aggression would be an excellent candidate. Even the lighter moments seem to have underlying levels of rage. This album is pissed off and aiming to make a point with this energy in regards to its place in the world.

Some of my favorite tracks would have to be the heavy “No Flowers for a Pig”, the emotional “Golden Cage” (which is followed nicely by “Frostbite”), the ender “Storms of Tragedy”, “Warzone”, and “The Hallow” with no less than a Jeff Walker (Carcass) feature. However, I’d say every track has worthwhile moments in one way or another.

On the downside, I do think this record falls into a number of modern metal clichés as the band wears some influence on the sleeve (sometimes a lot). There’s no doubt Spoil Engine are talented, but unfortunately they seem a bit dime a dozen at times. It would be interesting to see them develop more of a personalized sound to work with – right now, the vocal variety appears to be their most unique element. There are moments of certain tracks that drew direct parallels to pre-existing tracks from other bands with very similar passages. Also, there were certain choices that didn’t quite seem to fit – the beginning and end synth of “The Void” for example.

It’s easy to picture this band doing well in a live setting and, as I understand it, they’ve done just that! All of these tracks come with a driving push to move the music forward in a way that could easily spark mosh pits, headbanging, and a lift the metal horns. In several ways, this is an incredibly metal offering from Spoil Engine.

When it comes to sound in terms of production, the music behind this album, well… sounds great! Everything has its place and is glued together nicely for the full effect. Henrik Udd (who has also worked with Architects and Bring Me The Hoirzon to name a few) did a fine job on this front.

In the end, this is a largely enjoyable record that fluctuates anywhere from being decent to good in my mind. I truly believe some people will love this album but it’s not entirely my cup of tea. It has all the right elements to be an accessible metal record. It has some flaws but it’s certainly good for what it is and for that reason, I’m feeling somewhere around a 6.5 to a 7 out of 10 on “Renaissance Noire”. If you enjoy the idea of Melodic Death Metal being mixed with a modern Groove Metal and Metalcore sounds, this may very well be up your alley!

If you would like to follow along with Spoil Engine’s musical career, be sure to give the band a follow on one of their various social networks. This includes the likes of Facebook, Instagram, Twitter, etc. They also have an Official Website where you can learn much more. Once again, you can find the purchase and streaming links above and below with streams available across the page.