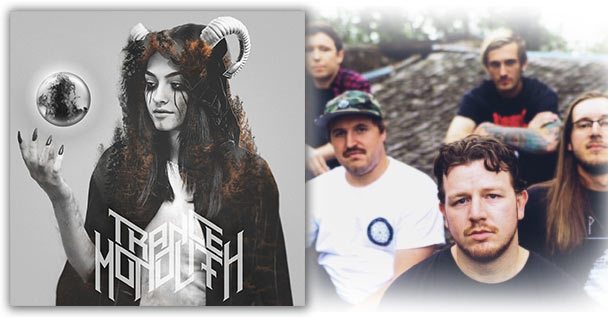 The cold of Fargo, North Dakota has brewed a grouping of musical minds in the form of Trance Monolith. Here we have a new band jumping into the audio waves headfirst. They did the damn thing and just put out their debut effort in the form of a self-titled album!

The beast weighs in at just over a half hour between its 7-track spread. Intro aside, the majority of these cuts hover around a 5-minute run time with plenty of earworms to be unearthed… so start digging!

In terms of sound, Trance Monolith are essentially a contemporary Progressive Metal band with plenty of other elements stirring up the mix. This includes crushing Death Metal / Deathcore type moments, some Post-Metal glory, Metalcore breakdowns, Hardcore vocals, Electronic sections and beyond. They can be unpredictable in a good way.

All that being said… Before we dig in too far, give a listen for yourself and see what you think! We have streaming options available up and down this page so press a play button. The band’s music is also available for streaming and purchase on most major online music platforms so head over to the likes of Amazon, Spotify, Apple Music, yada yada.

Now, the time has come to let our minds wander into a trance and see what comes of it…

In a way, my experience with this record has been in reverse. My introduction to this band was through the very last track on the new album – the single called “Husk”. That being said, this record ends much differently than it begins… While “Husk” goes for the throat with a blastbeat right away (prior to some truly awesome, yet less heavy passages), “Ritual” eases listeners in before stomping on them. The method is what I personally enjoy here. The opening passage reminded me a great deal of one of my favorite recent Death Metal acts – ADE – who’s new album I just listened to in the same stretch while reviewing this Trance Monolith record. The only reason why I mention this is that ADE uses ancient style percussion and instrumentation in their mix which isn’t a common thing. While the opening percussion on “Ritual” isn’t of ancient origin itself, the sound Trance Monolith gives is like something from the sands of time… and I’m here for it! This is accompanied by the counterpoint of an eerie guitar. Little over a minute in, there’s a seismic shift as a glacial breakdown moves into focus, sewing destruction around the prior drone of the eerie guitar. It has a nice, imposing air that is joined by some forceful vocals overhead.

There’s a sudden melodic transition into the second track “Requiem” as the guitar work really goes to shine through. This effectively demonstrates the musical variety one can expect from Trance Monolith early on. It’s also the first track featuring clean vocals to further emphasize the point. This melodic effect is further amplified through the following track “Odyssey”. It’s kind of like looking at the transition of one color to the next through a gradient as the album smoothly progresses from track to track. One thing is for certain here – Trance Monolith have a great sense of composition and tension control. They’ve effectively proven that they know how to pace a project from the outset.

The instrumentation truly shines through several parts of this record and consistently remains the primary element in my mind. There are several moments while listening to this album, even while doing so passively, that my ears will pique up at something interesting that Trance Monolith are doing. There’s a lot of talent put on display here and I’d say every track has stand out moments.

On the other hand, this very much has the feel of a debut record… but a good one! Trance Monolith are throwing a good bit at the board to see what sticks but it’s clear that they’re calculating their shots – there’s a reasonable flow between the transitions so the music never feels out of place despite the wide variety. I also have to hand it to them… At times, this album has felt more varied and original than some seasoned bands I’ve heard this year. That’s not to say it’s all sunshine. They do have moments that seem to slip into certain clichés of modern metal. However, when you stew it all up, there’s a great deal of explosive potential with Trance Monolith. Beware…

By contrast, I’m honestly not wild about some of the vocals across this record. In my opinion, they can seem a bit flat and dime a dozen in comparison to the rest of the presentation put forward here. There’s certainly variety (which is good) and technique on display. But, sometimes, it can seem a mismatch with the music or seem in need of more takes / practice to really nail the perfect sound and emotion.

However, there were other vocal moments I did like. For example, the opening track “Ritual” was impactful with the harsh vocals, the atmospheric vocals on “Mental Naught” were well placed (this one also had some guest vocals if I’m not mistaken), and “Ultimecia” had some good performances as well. I also thought the spoken word moments were interesting conceptually but, once again, could’ve used a few more takes or some form of audio black magic to make them stand out more.

In terms of sound and clarity, this record largely stands as a well produced effort. It has that professional feeling which is certainly a plus. Every element comes across in a clear manner that’s simultaneously glued in with the rest of the fireworks display.

While coming out of this particular trance, I would say this band has a lot going for them and this is a good introductory album to have placed under their belt. I’m curious to see where they grow from here because there’s lots of potential for future greatness and they’re already covering a wide spectrum of sound with this first step. All things considered, I’m feeling somewhere around a 7 to a 7.5 out of 10 for the Trance Monolith debut. This is a good start to a promising musical journey.

Once again, you can listen through the streams provided across this page and the music is available on platforms like Amazon, Spotify, and Apple Music.

In other news, it appears that Trance Monolith will be opening for Monuments and Skyharbor next year! Good fit, I’d say. Be on the lookout for shows like this if you’re from the North Dakota area because I’m sure this music would translate well in a live setting.