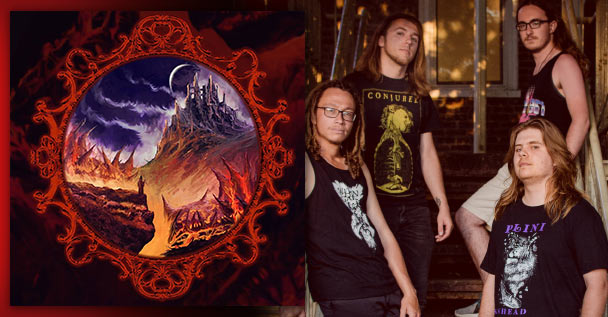 It has been foretold that a no-nonsense Melodic Death Metal band would rise up from the land of Winchester, Virginia to make the people headbang. This is “The Prophecy”… They are Deathless… and they are here to give you the metal! 🤘

This is an independently driven four-piece band just waiting to cast fire into unsuspecting ears. They’ve been hammering away at their craft since their recent formation in 2018. However, don’t be mistaken… For a newer band, their sound is fairly damn tight! Beyond the Melodeath approach, I’d also say there’s some Groove Metal akin to Lamb of God present in their sound. This is all clearly brought together by a good share of talent among the members with a collective mind for metallic songwriting.

Speaking of which, the band currently consists of four members. They are Connor Mowery up front on vocals and guitar, Jacob Nates also on guitar, Alex Kimble handling the bass, and lastly (but not least) Shane Polk on the drums.

Together, they have crafted an all new album going by the name of “The Prophecy” (as was heavily hinted). This is officially set for release on December 6th on all major music platforms (currently you can buy t-shirts and beer tumblers by CLICKING HERE). It’s also worth noting that this is a 100% independent released which is always respectable. With all of that being prophesized… Be on the lookout for their new music this Friday!

The effort clocks in at just under 35-minutes’ worth of new material across 10 tracks. But how does it all add up as an album experience? Let’s read into this particular prophecy and see…

From the very outset, it’s clear that your ears are in for a trip while listening to the Deathless debut. The introductory track, simply titled “I” is quite thematic as it eases listeners in before hitting them hard with the first full metal offering on the record “Predation”. This all works to make a worthy introduction to the world of Deathless (assuming you haven’t listened to those singles already!)

The riffs on this record are absolutely bestial. They’re performed at a high level and provided in a plentiful supply. They’re also frequently complimented by some kickass solo work. All of this is to say the three stringsmen do a great job across this record.

The drumming behind “The Prophecy” comes with deadly accuracy to compliment the various riffs. If I’m not mistaken, I believe they were recorded on a MIDI kit because some of the sounds are better than others – for example, the cymbals come with a certain hiss to them. However, the delivery itself is on point from front to back.

Vocally, things remain fairly consistent with harsh vocals (and nothing but!). They’re generally in the mid-range but will fluctuate into surrounding territories – especially upwards. There’s plenty of power belted behind them making them effective for what they are. The lyrics also seem to be well placed. As mentioned before, they’re handled by Connor Mowery who simultaneously plays guitar. Multitasking at its finest!

The music sounds something like a melodic soundtrack to the apocalypse. Huge walls of deathly music come crashing in with compliments anywhere from thinly veiled malice to scenes of grandeur. This album has an incredibly METAL feel to it with several moments clocking in high levels of intensity – a trend that persists throughout the record. It’s also capable of placing images in the imaginative listener’s mind… Not a bad album to sit back and listen to with eyes closed!

From time to time, musical interlude moments similar to the album intro will make their way in as a palette cleanser or will even be mixed in with the metal on tracks such as “Departure”. They’re well done but, at times, I wish they flowed better transitioning between the metal assault Deathless generally provides. Smoother transitions would really bring these to a whole new level and deepen the duality that the band is currently striving for.

A few favorites come to mind while looking over the tracklisting for “The Prophecy”. The singles “Into Depravity”, “Departure” and “The Prophecy” certainly stick out but the deeper cuts deal damage as well. For example, I have to single out “Absence Of Truth” as an absolute face-melter, the instrumental “In Aeternm”, and the EPIC ender that is “Imprisoned”. I wouldn’t say there are any weak links present in the grander scheme of this album.

In terms of production, the album does sound a bit squashed and harsh at times. However, everything comes through clearly enough with its own place in the mix despite the smoosh. It is worth noting that I’ve been listening to .wav files sitting at an ear wrecking -3.9 integrated LUFS so this could come across entirely different in terms of comparative loudness / harshness when it hits streaming services and beyond.

At best, I can say this is a solid Melodic Death Metal record. At worst, I would say the same because this band wears a lot of influence on their sleeve. So, if you’re expecting something to break down walls into new terrain, this isn’t it. But if you’re looking for a solid, new Melodic Death Metal album to sink your fangs into, Deathless have made an excellent candidate.

So… In the end, what comes of this particular prophecy? I would personally say the results are quite good. I still enjoy this album after listening to it several times over the past few weeks. The band seems to have come with a certain goal and accomplished it fairly well. It does have a few drawbacks but ultimately makes for a really good debut from a very promising band. As of now, I’m feeling somewhere around a 7.5 out of 10 for “The Prophecy” with anticipation to see where they might go from here!

Once again, the full album is set to strike this Friday, December 6th! Be on the lookout. In the meantime, you can enjoy the band’s singles for “The Prophecy” through the assorted streaming links provided above. This includes an awesome music video for the title track itself.