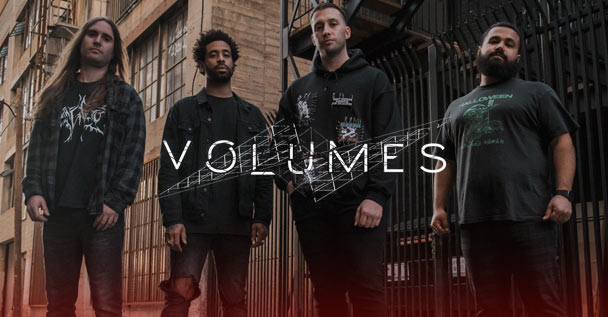 For those who are unaware, there have been significant changes in the Volumes line-up recently. This included the release of a new song which you can enjoy by CLICKING HERE.

As such, the band has released a statement explaining the situation:

“It looks like we have some explaining to do.

As many of you are now aware, Gus and Diego Farias are no longer with Volumes, and Michael Barr is now back with us in full force.

We want to give you one statement to answer some of your questions and set the record straight, so here it is:

Diego was never fired/kicked out of the band. Over the past few years, we have seen him grow in his career as a producer, and as a result, he lost the desire to tour with the band and then subsequently couldn’t further commit to the overall writing process with the group. Some of you may have noticed that in the past few tours, we have had various replacement guitarists tour with the band. We wish nothing but the best of luck for Diego and know that he is on the fast track of becoming one of the most successful producers in the game.

Gus’s situation in the band was a little bit more complicated, and we did inform him that we wanted to part ways several weeks back. We don’t feel it’s necessary to provide full details of how we came to this decision. Still, it’s honestly no different of any relationship that you have with someone for over ten years on a very personal level and decide things are just not compatible any longer. That’s all there is/was to it. Gus is happy working on his project as Yung Yogi, and he will kill the game moving forward.

We would be foolish to ignore or disregard their massive contribution as performers and songwriters to the band, and all know that they were there from the beginning. We have nothing but love for them and wish them the best. We have also sorted out several details on the business side of things to ensure that they have their rightful ownership of everything that they have done in the band, and will continue to as long as the group is in existence and beyond.

And now…Michael Barr is back! When things were at their lowest, and the idea of discontinuing Volumes was a genuine thought, the other members of the band, who had always kept in contact with Michael, started to have some light discussions about the ‘what ifs’. That quickly grew into more serious talks, and in a very short frame of time, we were all in the studio together, sharing ideas. It became very apparent, very quickly that this was something that we had to continue on with and make it real. We are so happy to have Michael back home.

We enlisted the help of our great friend, Max Schad, to produce/mix/track our first song as this lineup, ‘holywater’. The writing of the song was a thoroughly collaborative effort as a team between Michael, Raad, Myke, Nick, and Max.

Max is not the full-time guitarist for Volumes, but he will continue to work and write with the band. A touring guitarist will be with us on all dates for the time being. We are not looking to audition or have people send demos to us at this time. We will figure out permanent guitarists when it organically happens.

Volumes will be a full-time band. While various members will still work on other projects they have been involved with, this will be the priority.

We are supporting Born of Osiris in Europe/UK starting March 3rd, 2020, and we will have an exciting US run that will take place shortly after that announcing soon. A new full-length album will be released at some point in 2020 from Fearless Records. We are writing music that WE want to write and perform, but coincidentally, based on your reaction to “holywater,” it’s also the type of music that YOU want to hear…. and we couldn’t be more stoked about it.

Now off to Blare Fest in Nagoya, Japan (thank you Coldrain for having us) and then to Hawaii with our good friends in Crown The Empire

Much love and see you soon.”