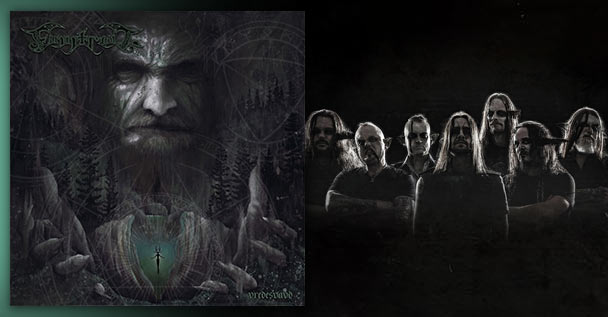 Background: Welcome to the troll horde! Fintroll is a Finland band made of literal trolls weaving together elements of Folk, Black, and Symphonic Metal for a compelling approach to the grander genre. They’ve been grinding it out since their inception back in 1997. In that time, this 7-piece metal unit has released 7 albums (those numbers worked out rather nicely, didn’t they?). 2020 also marks their first album release in 7-years (I’m noticing a pattern) with “Vredesvävd” working as the follow up to 2013’s “Blodsvept”. That being the case, we’re about to coat these Finnish forests with some liquid metal as we venture onward to discover what treasures Finntroll has in store…

This Album Sounds Like: An epic adventure through a fantastical realm threaded with untold mythological evils. This is a twisted, metal clad hero’s quest through treacherous, forrested terrain and through waves of foes that cannot stand against his might. It’s the deepest dream of a mossy toed troglodyte tramping through the verdant woods. It’s the sound of wooden kegs being cracked to fill the mugs o’ many to lubricate a druken sing-along… or eleven… If any of this sounds like a good time to you, stick around and give a listen!

Some Favorite Tracks: “Väktaren” leads in like the soundtrack to a Lord of the Rings spin-off only to plunge ears into the heavy waters with “Att döda med en sten”. “Ylaren”, “Mask”, “Vid Häxans Härd” and “Myren” also stood out. However, I found something to enjoy about every track present on this record.

Positives: This record is full-on, fantastical, Finnish folky fun that’s quite well composed. There’s a great energy surrounding every number of this record as things remain upbeat and ensconced in the spirit of metal music with folk sensibilities to boot. All of the 7 members bring a stand out performance that reeks of professionalism. There are many interesting instrumental elements brought up alongside your traditional metal fare. I also enjoy the differing lingual approach Finntroll brings. Despite being a Finland-based band, the vocals are delivered in Swedish due to Fenno-Swedish origins.

Negatives: Realistically, this album won’t be for everyone (especially for those without trollish ears). However, I think it’s highly enjoyable for what it is. Now, that being said, it’s not exactly the most original effort I’ve heard in 2020, falling into a number expected avenues for the collective sub-genres that its brought together. Admittedly I have not listened to much Finntroll in the past save a few singles but there were several points at which I could draw parallels to similar bands making it seem like the same old wheels are being spun here. But for whatever this may lack in seeming originality, it makes up for with metallic fun and good composition in kind! Other than that I’ll say that some of the VST instruments could’ve translated better.

In The End… This is a grand time soaked in ale, adventure and the innards of our foes! It’s the kind of music that will likely cause people to impulsively throw the horns in an involuntary headbanging session. It’s a high ranking effort so, all things considered, I’m feeling somewhere around a 7.5 to an 8 out of 10 here… Let’s round up and call it an 8! Give a listen for yourself with the streams across this page and see if your ears are worthy of the troll horde… 🤘