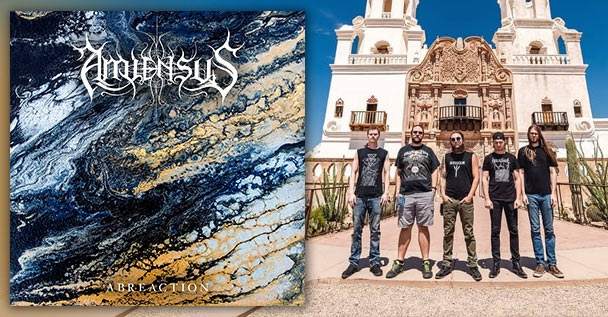 Background: The Minnesota-based Amiensus have signed on with Transcending Records to bring us their all new effort “Abreaction”. This was officially released today! If you’re unfamiliar with the band, they’ve been bringing us quality Progressive Black Metal for 10 years now. In that time, they’ve put out 3 primary full-length albums along with several splits and EPs to bolster the discography. They currently stand as a five-member band. With all that being said, let’s see what their collective minds cooked up this time around!

This Album Sounds Like: A whole mass of things. It’s epic, natural, dark and cinematic yet strangely uplifting and delightful. All around, I think this is a beautiful sounding record that’s capable of bringing up a wide range of emotion. Amiensus attack their sound from a number of angles to formulate an overall quality project in “Abreaction”. I can easily see a wide range of people enjoying the sound of this record. If you enjoy bands like Opeth, Numenorean and Agalloch, just stop what you’re doing and listen now!

Some Favorite Tracks: Obviously, the opener “Beneath The Waves” struck me first and the single “A Convocation of Spirits” got me interested in the first place (and comes with a beautiful instrumental acoustic bonus version). “Divinity” was truly divine in its expansion upon the band’s initial approach. Similarly, “Euphorica” and “Inconoclasm” brought a different, darker angle. Damn… soon I’ll literally just be naming off the whole track list here… You get the picture… Listen to this album!

Positives: This is an epic record that lands dynamically in the ear. The five members of this band do a great job of remaining cohesive with a singular mission of producing great, professional music. Every moment of musical composition appears to be brought forward with significant consideration from the instrumentation below to the layering of vocals up top. There are also beautiful moments that land outside the meat and potatoes “Black Metal” palette of instrumentation (obviously, this band does much more than average Black Metal fare…) from strings to acoustic guitar to brass and beyond. I also loved how much emotion was packed into each and every track.

Negatives: At times, the production sounds a bit rough. Luckily, this doesn’t do much to hold back the experience as a whole seeing as the band delivers a solid performance here. Also, while I truly enjoy what Amiensus is doing here, I wouldn’t rush and say its completely original or even the best in this particular field. However, it is truly great for what it is and I enjoyed listening to it quite a bit!

In The End… This is a great offering from Amiensus. They’ve successfully continued to produce high quality music capable of moving the listener in a number of ways as their discography grows richer with every release. With everything on the table, I’m feeling at least a strong 8.5 on this one. I highly suggest you all give this one a listen! Streaming options are available across this page!