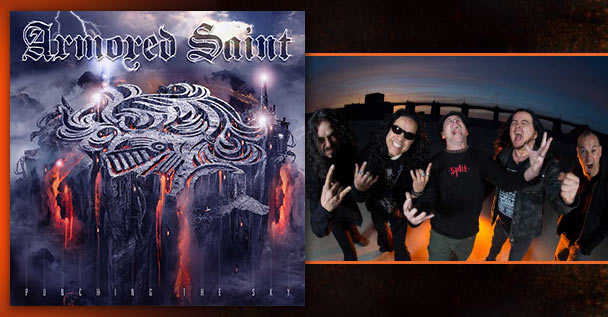 Background: Armored Saint have been hard at work since the early 80s, carving themselves a place on the map of Heavy Metal. In that time, they’ve released 8 full-length records and built the ranks of their fandom the world over. This past week, they gave the world their latest in the form of the album “Punching The Sky”… Time for a review!

This Album Sounds Like: ‘eavy fookin’ metul… from America! This is an updated effort from a classic band doing what they do best. This record sounds anywhere from putting on armor to ride into battle to hopping on a motorbike and going for a ride on an endless highway. It’s choose your own, grease covered adventure metal!

Some Favorite Tracks: I think every track had something to enjoy. The opening “Standing on the Shoulders of Giants” with the bagpipes was gorgeous and I enjoyed the indigenous instrumentation on the closer “Never You Fret” too so good bookends. “End of the Attention Span”, “Missle to Gun”, “My Jurisdiction”, and “Do Wrong to None” were also stand outs. However, if you like heavy metal, just give the whole thing a listen.

Positives: This is a fun metal album with a classic feel to it. The singer’s voice has a prime heavy metal feel and the instrumentalists do a good job as well. I do believe every song has a guitar solo so that’s kick ass to say the least. Though this is mostly standard metal fare, there were stand out creative moments here and there. One could tell that the budget of this album was put to good use between some of the unexpected instrumentation and the production to back it all up. All of this is to say, Armored Saint’s “Punching the Sky” is thumbs up material.

Negatives: For the most part, we’re not breaking into any new musical ground here. Just to repeat, I will say there are some cool ideas lining these tracks but it’s 80 – 90% standard metal fair at the end of the day. I also have to say the lyrics on this album are kind of cheesy. I don’t usually care about lyrics in metal unless they stand out but these could be distracting. If the singing wasn’t so good, it would be harder to take seriously.

In The End… This is a really good metal effort from a classic band. I wouldn’t say that it stands beyond other classic bands in the modern era but it’s definitely enjoyable in its own right. When all is said and done, I’m feeling a 7 out of 10 for the new Armored Saint record. If you’d like to give a listen be sure to press play anywhere on this page or head over to your favorite music platform and make it happen.