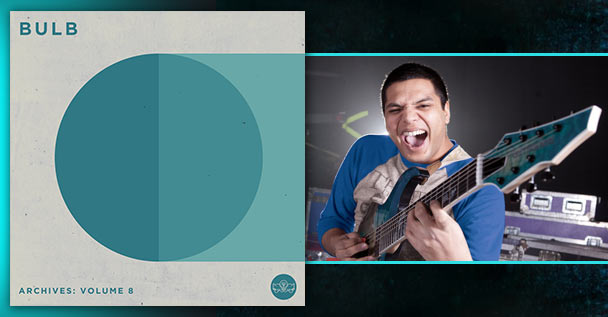 Background: Where to begin? If you’re unfamiliar with Bulb, it’s the moniker of periphery guitarist / founding member Misha Mansoor. This is the project he started before the band was born. It was effectively his vehicle to release demos online through platforms like Soundclick – many of which would go on to be Periphery songs. These were the roots of the movement that he would help create in modern metal music which essentially combined Meshuggah type grooves with high-end melodic songwriting. As they say, the rest is history. Earlier this year, it was announced Misha would be releasing 10 albums worth of Bulb content through Periphery’s own 3DOT Recordings. Formally known as the “Bulb Archives”, they travel through time, starting with his latest demo material back to the genesis of it all. The last of these archives just came out today – so let’s attempt a review of sorts!

This Album Sounds Like: Hopping on a time machine to tour the history of modern djent / progressive metal music. This might be a Periphery fan’s wet dream. For first-time listeners, this is an absolute gold mine of instrumental modern metal music. For a long time listeners, this is a trip down the ‘stalgia lane. For me, it was a throwback to finding my first Bulb demos on Newgrounds (of all places) back in ~2008.

Some Favorite Tracks: I don’t think there are nearly enough to choose from… Okay, I’ll look over the tracklist and leave a list that jumps out to me. I’m not saying these are the “essentials” or even the best of the archives – they’re just the ones that leapt at me in the spur of the moment… “Fuf 1.5”, “Not Enough Mana 1.5”, the april fools tracks are hilarious, the Final Fantasy covers are classics, the band used to open shows with “New Snu”, “Breeze”, “B Equals D”, “Epic Fail”, “Press Enter”, both versions of “Tiger”, “Unleash The Pwnies”, “Coldemark”, “Ms. Doppertunity”, “The Focus Hour”, “Halfway To Infinity”, “There Is A Wocket In My Pocket”, “From 2 to 7”, “Sweden, MD”, “Aural Pleasure”, “Oxmodious”, “Godma”, “Soul Crush”, all the “test” tracks are dope, “Absent”, “The Last Day” aaaand I could go on…

Positives: You can legitimately listen to the bulb archives for hours on end. Listening to the whole collection is like witnessing an evolving tapestry of Bulb’s long running work (15+ years if I’m not mistaken!). I’m so happy this material has finally landed on streaming services for us nerds to enjoy. There is a wealth of sound and a variety of musical ideas to enjoy here. To make a VERY long story short, if you enjoy Periphery as a band – this will be your cup of tea.

Negatives: If you were expecting 10 albums worth of brand new or re-produced Bulb material as some were, then disappointment could be a negative factor. Personally, I was upset that the full version of the original “Fuf” wasn’t included. Instead we have the version that abruptly cuts off still! So, forevermore, I’ll venture to YouTube for the full version… Other than that, I was pleased with this collection of music.

In The End… As a longtime Periphery fan, I’m personally very happy to see these archives become more accessible. I enjoyed the entire collection. However, giving the wide variety and time span of music here, it doesn’t seem proper to give this collection a normal 1 to 10 rating. That being the case, the “Bulb Archives” get Misha’s guitar wanking face out of 10. The entirety of these archives are now live and streaming on your favorite music platforms. You can also stream a fraction of the tunes on this page. Enjoy the music! You’ll be listening for a while…