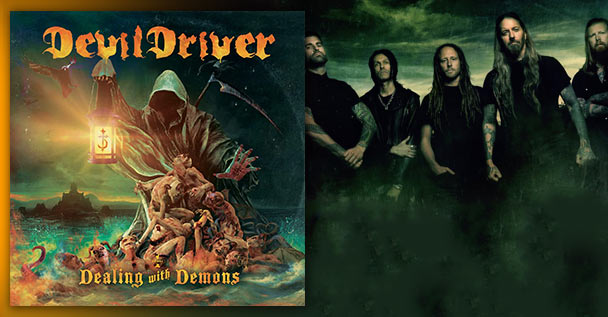 Background: DevilDriver have become a mainstay in Groove Metal music. Formed by none other than Dez Fafara (Coal Chamber), they’ve been at it since ’03, releasing a total of 8 full-length records in that time (9 if you include the recent covers album). Often compared and contrasted with the likes of Lamb of God and Chimaira, they’ve planted themselves among the leading edge of this heralded approach to metal music. They just launched the first part of their proposed “Dealing With Demons” series through Napalm Records – let’s see how much damage it deals.

This Album Sounds Like: A cold-prickly series of grooves n’ Gothenburg. “Dealing With Demons I” has an angry, anti-social bend to it. Many of these tracks seem like a ferocious rejection to the world which is laid out plainly from the very beginning with a track quite literally titled “Keep Away From Me”. Dez does not want to have a beer with you but you’re probably the reason why he drinks.

Some Favorite Tracks: I really enjoyed the ending trio with from the title track onwards but the whole album proves to be enjoyable for what it is. For example, off the top of my head, “You Give Me A Reason To Drink” had a great vocal performance over it’s mid-pace onslaught and I thought things picked up with “Nest of Vipers” after not being particularly “wowed” from the album’s beginning.

Positives: It’s not hard to bang one’s head to “Dealing With Demons I”. If you like DevilDriver, you’ll find something to like with this new record. It’s really that simple. It’s a consistent, groove-laden, heavy-hitting juggernaut of an album from this band. The talent shows. It’s also well produced by Steve Evetts (Suicide Silence, The Dillinger Escape Plan, Havok).

Negatives: I can’t give this high points for creativity or originality. Despite the solid execution, this is a record we’ve all heard before. It’s good to depend on DevilDriver to fill a certain lane but it would be cool if they pushed more boundaries moving forward. It’s good for what it is but DevilDriver are just plain predictable at this point… I also wish the pace would pick up on some of these tracks but that’s just personal preference.

In The End… This is a good record. It’s not mind blowing but it is a solid chunk of what we’ve come to expect from DevilDriver. For that reason, I have no qualms giving this a 7 out of 10. Let’s see how we deal with demons in the anticipated part II next year. In the meantime, give this first edition a go through the streams provided on this page.