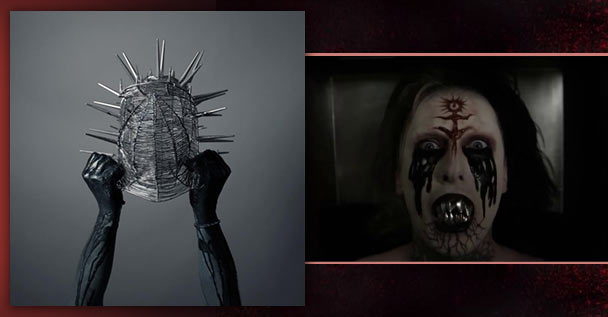 Background: I never thought I’d be reviewing Ghostemane on The Circle Pit but here we are. For those who are unaware, Ghostemane is a South Florida rapper whose style has been heavy within that genre and has aesthetically borrowed from metal and hardcore over the years. However, it seems he has at least partially crossed the bridge partially by co-opting metal, hardcore, and industrial music directly into his style for a full record release.

This Album Sounds Like: Ghostemane dropped a bunch of acid then proceeded to listen to nothing but Marilyn Manson and Code Orange before heading out to a Blade style vampire nightclub where he proceeded to rap really, really fast then scream (then whisper).

Some Favorite Tracks: “Vagabond” into “Lazaretto” was probably my favorite part, the Marilyn Manson Worship on “ASMR”, “AI” and “Fed Up” had cool underground rap vibes. “Melancholic” was a chilling insight of depression.

Positives: Ghostemane took a risk. While it’s not entirely surprising given his roots and aesthetic, he took the next step on wax and incorporated it into a full album release. As it’s always been, his rapping is on point and quite technical ranging from slow chants to all out assaults on the concept of words per minute. This and the sound design were probably my favorite elements of this album as a whole. There’s an incredibly dark and menacing atmosphere acting as a catalyst for this entire record. Despite the variety of sound put forth, it all functions together pretty damn well in the end.

Negatives: This is certainly one of those beauty and the eye of the beholder deals. Being that this is primarily a metal site, I can objectively see massively mixed reactions from you guys as listeners to a project like this. Obviously, Ghostemane has approached metal here on a level that he hasn’t quite approached before and, to be honest, I’d say the results are mixed. Some moments hit hard and are pretty damn fun – for example “Lazaretto”. Others are underwhelming – for example the breakdown on “Sacrilege” or that weak bass line at the end of “Calamity” between moments of really cool distortion. Honestly, some of this sounds like metal and hardcore for people who have never heard metal and hardcore before. Like the breakdown at the end of “AI” was such a non-event but I can see some people going crazy for it merely because it’s heavy. So, once again, beauty is in the eye of the beholder.

In The End… I found the task of rating this album to be difficult. Because, at a baseline, I do enjoy this record but it all depends on how you look at it. If I were to stack it against the metal albums that are usually rated on this site, it would be kind of mediocre. But within the context of what it is, an underground rap album doing genre blending, I think it’s pretty good. So, instead of a numerical rating I’m just going to give it one of those Ghostemane logos out of 10 and call it a day. Objectively, I could see some of you loving this I could see some of you hating this. Either way, it’s at least worth giving a shot!