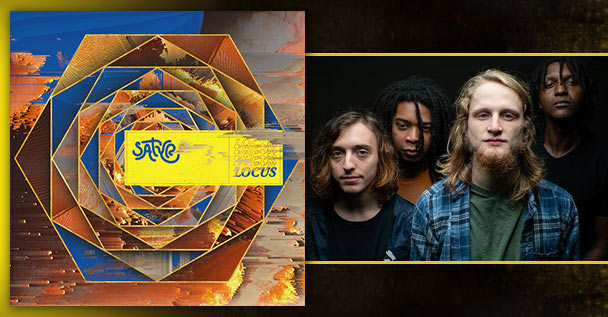 Background: If you follow The Circle Pit with any regularity, you may have seen the question floated as to this being the best new Prog band of 2020. They’re Satyr and they’re a four man power house of extremely talented musicians looking to kick you right in the ear. This Atlanta band is among the most exciting to place themselves on the map in recent history and their 2020 album “Locus” is a monolith amongst debuts. Press play on any of the videos on this page or read on for my opinion.

Also, as stated by the band themselves… “Satyrtonin improves your mood, sleep, life, appetite, energy level, and decreases nervousness. It can also decrease back pain. Take this medication by ear, 5 or 6 times a day with or without food. Some conditions may occur when this medication is suddenly stopped, such as: dizziness, mood changes, confusion, headache, diarrhea, and brief feelings similar to electric shock.”

This Album Sounds Like: an abstract ear massage or a big ol’ fashioned gang bang between beautiful, extreme, abstract, emotional and creative sounds. It sounds like every member got their 10,000 hours of training (and some) then promptly decided to drop some jaws and induce jealousy in musicians the world over. This that good good.

Some Favorite Tracks: Every track is chock-full of musical mind fucks. I believe they’re all worthwhile, but if I had to pick favorites they would certainly include “Bird” which might be my favorite, the single “Picayune”, the opener “Apogee”, the huge sound of “Not to Scale” (which is most certainly not to scale), the instrumental “Mushroom” and if I keep going I’ll end up naming the whole album…

Positives: Where to begin? First and foremost, I may have already mentioned in several ways that Satyr are insanely talented from top to bottom. Every member of this band deserves multiple pats on the back for the performances put forth on “Locus”. This is a fusion of incredible creativity and eclectic songwriting bringing ears one surprise after another. The band takes all sorts of ideas and throws them at the wall… and by some luck, most of them stick! That’s one of my favorite things about the energy some new bands bring to the table and, for that reason, I would place this up with some of my favorite prog debuts over the years… And the energy on this thing is high octane to say the least! On top of all this, the production allows every element of this album to shine with full beauty. If I had three thumbs… they’d all be up right now.

Negatives: To be honest, I wasn’t the biggest fan of the clean vocals at first. They almost seem more suited for a musical than a metal band. However, they did grow on me with time and eventually struck me as unique. I also thought the album ended quite abruptly on “Null” without a period to end the sentence. It’s not the longest album out there clocking in at about 30 minutes – so this could effectively left me wanting more but DAMN… Objectively, this album will not live up to everyone’s personal taste and obviously that’s okay. However, for the rest of us this is quite some ear candy.

In The End… This is a thoroughly excellent effort for a debut record. It’s easily among the best that I’ve heard in recent history. Satyr have quickly and effectively placed themselves as a threat in the Progressive music scene. For all of those reasons and more, I have no issue giving the Satyr debut album a very well deserved 9 out of 10. I’m very excited to see what they come up with next! Huzzah!